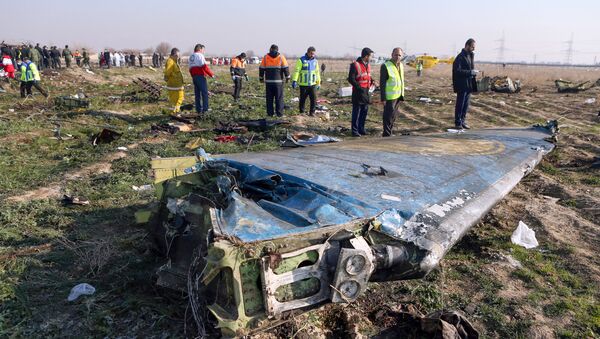 © AFP 2021 / AKBAR TAVAKOLI
Subscribe
The Iranian admission of its guilt in accidentally shooting down the Ukrainian Boeing 737-800 contrasts sharply with to the US' reaction to its downing of Iran Air Flight 655 in 1988, says American writer and media commentator E. Michael Jones, outlining the "real cause" behind the tragedy.

On 11 January, Tehran admitted that it had mistakenly downed Ukrainian Boeing 737-800 (Flight PS752) hours after Iran's retaliation strike on Iraqi military bases housing American troops following killing of Quds Commander Qasem Soleimani in a US targeted drone attacked earlier this month. According to the Islamic Revolutionary Guard Corps, the country was at its highest level of readiness expecting possible tit-for-tat measures from the US.

"The Islamic Republic of Iran deeply regrets this disastrous mistake," Iranian President Hassan Rouhani tweeted on Saturday, offering his sincere condolences regarding what had happened.

For his part, the country's Foreign Minister Javad Zarif highlighted that "human error at time of crisis caused by US adventurism led to disaster", while the Iranian military stated that the parties responsible for the unintentional downing of the Ukrainian plane would be held accountable by the judiciary.

​"The reaction of the Iranians was in marked contrast to how the American government reacted to a similar incident, when the guided missile cruiser USS Vincennes shot down the Airbus carrying Iran Air Flight 655 [on 3 July 1988], killing 290 innocent people, including 66 children," says E. Michael Jones, an American writer, media commentator and editor of Culture Wars magazine. "Unlike Iran’s Supreme Leader, Vice President George H. W. Bush refused to apologise for the incident, saying 'I’ll never apologise for the United States of America ever, I don’t care what the facts are."

The writer recalls that although the United States government expressed “deep regret” over the incident and paid $61.8 million in damages to the victims, it "never admitted legal liability nor did they formally apologise to Iran".

According to Jones, Foreign Minister Zarif "got to the heart of the matter when he said that the cause of the recent disaster was a combination of human error and American adventurism.

"The real cause of this tragedy is America’s abandonment of diplomacy under the Trump administration and the pursuit in its stead of a reckless brinkmanship which led the world to the brink of nuclear war," the writer opines.

He suggests that Washington "started down this path" when the Trump administration unilaterally withdrew from the 2015 Joint Comprehensive Plan of Action (JCPOA) in May 2018.

The writer argues that Donald Trump "who once said that he never had to apologise for anything in his life, can show his remorse for creating this situation by firing Treasury Secretary Mnuchin, author of the sanctions that are an act of war against the Iranian people".

The Ukrainian flight heading to Kiev crashed near Tehran's Imam Khomeini International Airport soon after take-off on 8 January. The plane crash killed all 176 people on board, including 167 passengers from Iran, Ukraine, Canada, the UK, Germany, and Sweden, and nine crew members. Previously, Tehran refuted the claims that the Ukrainian aircraft could have been downed by an Iranian missile and was inclined to blame the incident on a technical malfunction.

France's Bureau of Enquiry and Analysis for Civil Aviation Safety (BEA) reported Saturday that black boxes of the plane would be deciphered in Ukraine, while "communication on the timeline and investigation progress is the responsibility of Iran’s Air Accidents Investigation Branch (AAIB) authorities".