Ghosn Questioned for Up to 11 Hours, Claims Japanese Lawyer 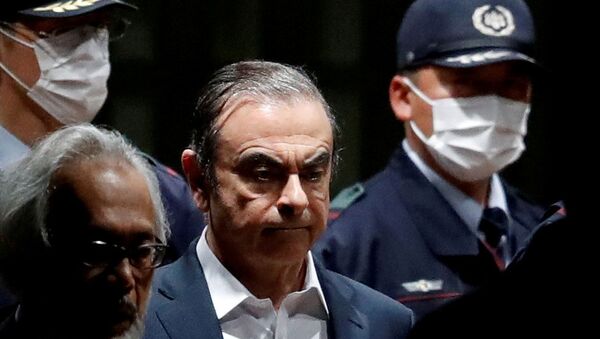 © REUTERS / Issei Kato
Subscribe
The Brazilian-born French former CEO of Nissan Motors for 20 years, Carlos Ghosn, was granted a bail request after being arrested in Japan on a series of allegations in 2018, including over personal losses of up to 16.6 million USD in 2008. He promptly escaped the country to Lebanon in December 2019.

Former Nissan Chairman Carlos Ghosn, who broke bail to flee to Lebanon while awaiting trial in Japan, was questioned an average of seven hours daily without a lawyer present, according to his lawyer.

In a blog post on Saturday, Takashi Takano, who currently works as attorney for Ghosn, claimed his client was interrogated through weekends, as well as the Thanksgiving and Christmas holidays.

Takano also said he told Ghosn he should not expect a fair trial under the Japanese legal system but that he could still win the case due to the lack of evidence against him.

The attorney also recently examined the prosecutors' data and Ghosn's notes to score up the total hours of questioning for 70 of the days that Ghosn was imprisoned.

According to the tally, on three of those days the Brazilian-born businessman had been questioned for up to 11 hours.

Ghosn's case has led to a rise in criticism of alleged problems with the Japanese justice system, with some observers saying long periods of detainment can lead to false confessions.

He was detained 130 days due to two distinct charges; underreporting his future compensation and allegedly diverting Nissan Motor Co. money for personal gain.

Ghosn has consistently maintained his innocence, and accuses Nissan and officials in the Japanese government of plotting to remove him from his position.

During a press conference in Beirut, the 20-year former CEO for Nissan said the compensation was never determined and all payments were used for legitimate business activity.

He used the conference as a platform to slam the Japanese justice system as rigged and harsh. Advising all foreigners to leave the country, he said he had been held in solitary confinement while harshly questioned without a lawyer present.

Japanese prosecutors and Justice Minister Masako Mori, however, have repeatedly highlighted the country's low crime rates and rebuked the attacks, claiming that the country is dedicated to upholding human rights.

Mori stressed cultural differences and that the system is appropriate according to Japanese law.