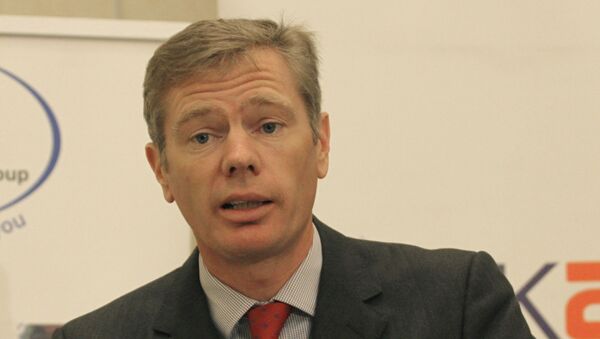 UK's Foreign Secretary Dominic Raab previously condemned the arrest of the envoy, calling it "a flagrant violation of international law".

The UK Ambassador to Iran Rob Macaire has denied participating in and organising protests in Tehran that allegedly called for the prosecution of those responsible for the fatal mistake that led to the downing of the Ukrainian Airlines plane in the Iranian capital earlier this week.

The envoy posted a tweet in which he said that he did not participate in the protest, but rather came to honour those who perished in the plane crash.

In a separate tweet, he wrote that he was arrested half an hour after leaving the vigil, adding that arresting diplomats is a breach of law.

In turn, the Iranian deputy foreign minister has tweeted that UK ambassador Rob Macaire "wasn't detained but arrested as an unknown foreigner in an illegal gathering" and was freed 15 minutes after his identity was confirmed.

He wasn't detained, but arrested as unknown foreigner in an illegal gathering. When police informed me a man's arrested who claims to be UK Amb, I said IMPOSSIBLE! only after my phone conversation w him I identified, out of big surprise, that it's him. 15 min later he was free. pic.twitter.com/VjuZxN1oTN

​On Saturday, Iran admitted the Ukrainian Boeing 737 was unintentionally downed by its military, taking full responsibility for the crash and expressing its condolences to the families of the victims and all nations involved.

According to the commander of the Aerospace Force of the Islamic Revolutionary Guard Corps, Amir Ali Hajizadeh, Iran's military mistook the jet for a cruise missile and shot it down by mistake. Iran had previously insisted that the crash that killed all 176 people on board occurred due to a technical error.​