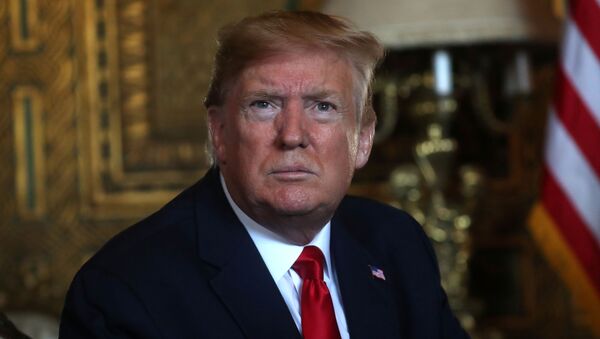 Protests in response to Iran's downing of the Ukrainian jet began as peaceful demonstrations but quickly took a violent turn, as protesters demanded the resignation and prosecution of those responsible for the crash.

US President Donald Trump has tweeted he and his administration are monitoring Saturday's protests in Iran "closely" and expressed support for the participants in the demonstrations in Tehran.

The president posted the same tweet, this time in Persian, immediately afterwards.

A peaceful gathering of hundreds of students outside the Amirkabir University of Technology in Tehran to honor those killed in the fatal Ukrainian plane crash in Iran resulted in a rally, with protesters demonstratively tearing the portrait of slain Gen. Qasem Soleimani, killed in the US targeted attack on 3 January.

Earlier in the day, US Secretary of State Mike Pompeo also praised the protests in Tehran, characterising Iran as "Khamenei's kleptocracy".

It is not the first time the US administration has advocated for protests in Iran, as Washington has repeatedly blasted Tehran for what they perceive as an "oppressive and illegitimate regime" and called on other states to increase pressure on the nation.

Pompeo said earlier that Iran must "fundamentally change its behaviour", otherwise, "it can watch its economy collapse".

The US' approach to sanctions betrays a pathological and reckless addiction—a condition that renders no bounds or boundary to what the US may or may not do.

And this addictive behavior affects friends and foes alike, unless collectively pushed back.#EconomicTerrorism