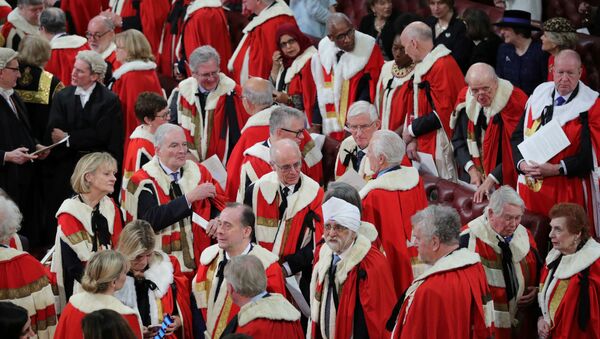 © REUTERS / POOL
Subscribe
The House of Commons vote on Boris Johnson's withdrawal agreement has brought an end to the three-year long political discord that followed the Brexit referendum of 23 June 2016. Dr Martin Farr and Sir John Curtice have given their prognoses on the House of Lords vote and transition period.

On 9 January, the House of Commons voted 330 to 231 in favour of Prime Minister Boris Johnson's Brexit deal thus paving the way for the country's pull-out from the European Union at the end of the month. The prime minister's Withdrawal Agreement Bill will now pass to the House of Lords for consideration next week.

Why House of Lords is Unlikely to Block the Bill

The House of Commons' voting records were remarkable, according to Dr Martin Farr, senior lecturer in Contemporary British History at Newcastle University.

"Every single Conservative MP voted for the measure", he notes. "And every single non-conservative MP voted against the measure. And it went through with a large majority. So it's an absolutely clear reflection of the outcome of a general election as the government, which has a mandate - and effectively now after two years where parliaments mattered a great deal and votes were uncertain almost every time they were held. We now have a completely stable government with a large majority in which Parliament really has nothing but scrutinising powers. It has no real power anymore. And that also applies for the House of Lords".

According to Farr, there are virtually no obstacles to Johnson's Brexit deal passing the House of Lords, which means that at 11:00 p.m. (GMT+0) on 31 January the UK will bid farewell to the EU.

Sir John Curtice, professor of politics at the University of Strathclyde, echoes the Newcastle University lecturer by saying that "it’s close to 100 percent as anything is in life" that Britain will now leave.

The professor does not rule out that there will be "some argument" in the House of Lords over the Withdrawal Agreement Bill.

Curtice points out that under the terms of the Salisbury Convention, "the House of Lords will not block a bill that appears in the government's manifesto".

Having exited the EU on 31 January, Britain will enter into an 11-month transition period that is due to end on 31 December 2020.

The UK-EU trade deal still remains an issue deserving further consideration: on 8 January, European Commission President Ursula von der Leyen signalled that it would be "impossible" to strike a comprehensive trade deal by the end of 2020, in contrast to Johnson's earlier claim that the deal could be concluded by December.

Today I met with @vonderleyen. When we leave the EU on January 31st, we will negotiate a new free trade agreement with our European partners and continue to work together as friends and sovereign equals to tackle the world’s greatest challenges. pic.twitter.com/ahN6gYqIVn

​Sir John Curtice shares von der Leyen's stance: "I think there's certainly widespread skepticism that there will be a fully dried and dusted trade deal that will be in place by the end of December, not least because the timetable is actually even shorter than is indicated, because you're going to full trade deal by then", he says, adding that in addition one has "to get it ratified by the parliament of every single EU member, which take another three months of the excise".

Commenting on the trade accords Dr Farr suggests that judging from Johnson's statements and his withdrawal bill, the prime minister wants a "fairly clear and hard trade deal in the sense that he does not want to have high levels of alignment".

"He wants to have much more of a clean break, not a no-deal Brexit, but a clean break, which would have higher alignments and easier access to the single market. And also has passed a law which means that he won't be able to extend the transition period", the academic emphasises.

While a lot of work remains to be done in terms of sorting out trade issues both Farr and Curtis agree that since the UK is on track to leave the EU it provides both Britons and Brussels with "some certainty".

000000
Popular comments
The house of Lords is the biggest incongruence in the so called "the world's oldest democracy". How can a bunch of stuck up, stiff upper lip, unelected, public school old poofs, overturn any decision taken by the people through their Parliament, and still be called it a "democracy"?