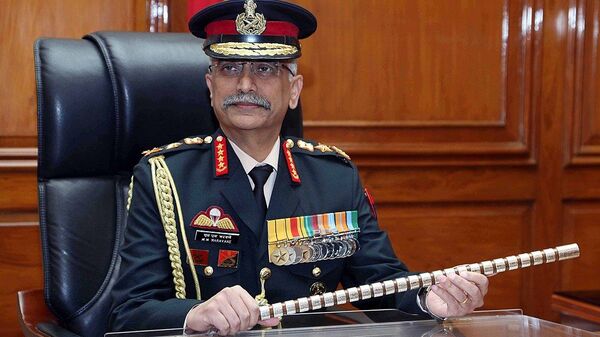 New Delhi (Sputnik): Kashmir has been a bone of contention between India and Pakistan since 1947, when the two countries gained freedom from British colonial rule. Both govern part of the region, but claim it in full.

Indian Army Chief General Manoj Mukund Naravane, in his first press briefing in the role, said that forces are ready to take appropriate action to gain control over the Pakistani side of Kashmir. The statement came five months after India’s Foreign Minister Subrahmanyan Jaishankar said that he expected India to gain physical control over the Pakistan-administered part of the Kashmir region one day.

“There is a parliamentary resolution that entire Jammu and Kashmir is a part of India. If Parliament wants it, then that area (Pakistan controlled Kashmir) also should belong to us. When we get orders to that effect, we'll take appropriate action”, Indian Army Chief Naravane replied to the media in New Delhi on Saturday.

#WATCH Army Chief on if PoK can be part of India as stated by political leadership: There is a parliamentary resolution that entire J&K is part of India.If Parliament wants it,then,PoK also should belong to us. When we get orders to that effect, we'll take appropriate action pic.twitter.com/P8Rbfwpr2x

The Army chief said that the Line of Control that divides Kashmir between the two nuclear-armed nations is a very active. “Intelligence alerts are received on daily basis and they are looked into very seriously”, Naravane said.

The recent tension between India and Pakistan ignited after New Delhi revoked the seven decades old temporary special status accorded to its administered Jammu and Kashmir state and later bifurcated it into two federally administered territories in August 2019. Islamabad termed the move as a violation of a bilateral treaty, the 1972 Simla Agreement, and the UN Convention, as well.