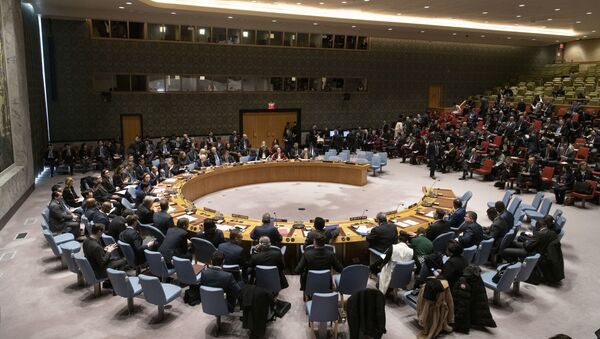 © AFP 2023 / MARK GARTEN
Subscribe
International
India
Africa
The United States, the United Kingdom, China, and Russia abstained from voting on the resolution, while other 11 members voted in favour.

The United Nations Security Council has renewed its cross-border humanitarian aid operation in Syria, but the number of crossings and length of authorisation has been reduced.

Aid deliveries will continue from Turkey, paragraphs 2 and 3 of Security Council resolution 2165 (2014), for six months, but two cross-border points - the Al-Yarubiyah border crossing with Iraq and the Al-Ramtha crossing with Jordan - were dropped, according to Reuters.

The document also requests UN Secretary-General Antonio Guterres to report to the Security Council by the end of February this year on the possibility of using alternatives for the crossing of Al Yarubiyah to ensure that aid reaches Syria through the most direct sources.

Speaking after the vote, Russian Permanent Representative to the United Nations Vassily Nebenzia said that his country did not cast a veto on the European resolution because of people in Idlib who heavily rely on such assistance.

"We say frequently that humanitarian assistance must remain within the context of the humanitarian focus", Nebenzia said.

A draft resolution on deliveries of humanitarian aid to Syria via Turkey was submitted by Russia earlier on Friday. The document demanded the exclusion of the Al Yarubiyah and Al-Ramtha border crossings for a period of six months (till 10 July 2020). It also stipulated that humanitarian assistance into Syria should be delivered based on the principles of humanity, neutrality, impartiality, and independence by the phrase that such aid should be provided " in accordance with the guiding principles of humanitarian emergency assistance, as contained in UNGA resolution 46/182".

The agreement was reached after Belgium and Germany decided to amend the original version of their joint resolution, which proposed keeping three points for cross-border deliveries into the Arab republic. Germany and Belgium, along with Kuwait, represent the so-called humanitarian troika on Syria.

The cross-border assistance mechanism was established back in 2014 and has since been renewed every year. It allows humanitarian aid to be delivered through UN-approved checkpoints.

Russia has been extremely concerned about who is actually receiving aid deliveries in Syria, fearing that the original 2014 resolution was politicised in order to favour certain groups over others.

"All cries about the catastrophe which the North-East faces if we close one cross-border point are irrelevant because humanitarian assistance to that region is coming from within Syria. But the situation on the ground changed. We have to reflect it", Russia's Envoy to the US said.

Syria has been engulfed in a devastating war since 2011, with the government forces fighting against several opposition groups, as well as with militant and terrorist organisations, including Daesh*.