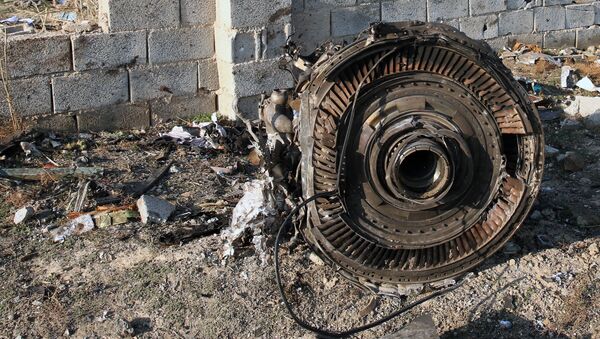 Finian Cunningham
All materials
A mobile phone video supposedly taken by an amateur bystander in Tehran purports to show the moment an Iranian air-defense missile hits the doomed civilian airliner.

The 19-second video was published by the New York Times on January 9, the day after the fatal crash in which all 176 people on board were killed.

Flight PS752, a Boeing 737-800, took off from Tehran’s Imam Khomenei airport at 6.12 am local time. About two minutes later while flying over the Tehran suburb of Parand, the aircraft became stricken and reportedly stopped sending flight data. The jet flew for another minute and a half before slamming into the ground. 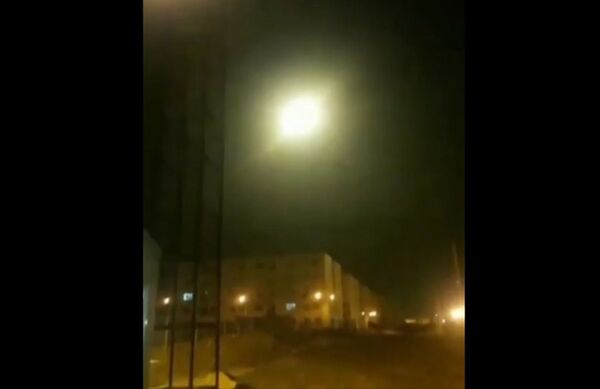 This image taken from a video on Wednesday Jan. 8, 2020 and provided by Nariman Gharib shows an object said to be the Ukrainian jetliner flying in sky at the moment of explosion with a flash of light. Western leaders have said the plane appeared to have been unintentionally hit by a surface-to-air missile near Tehran, just hours after Iran launched a series of ballistic missiles at two US bases in Iraq to avenge the killing of its top general in an American airstrike last week. Iran on Friday Jan. 10, 2020, denied the allegations.
© AP Photo / Nariman Gharib

Another amateur video apparently taken from a family car traveling on a motorway shows the plane on fire before it crashes with a massive explosion. From the crash site, it appears that the pilot was trying to return the stricken jet to the airport. This latter video seems a plausible random observation since the plane is on fire and flying for a lengthy time. We will return to the first video in a moment.

Western intelligence agencies are claiming that the airliner was struck by two surface-to-air missiles fired by Iranian military. The claim has been backed by Canadian prime minister Justin Trudeau as well as British counterpart Boris Johnson. It has been suggested that the Iranians may have accidentally shot down the passenger plane owing to the heightened tensions between the US and Iran. Four hours before the air disaster, Iranian ballistic missiles had attacked two US bases in Iraq in revenge for the American drone assassination of Major General Qassem Soleimani on January 3.

The implication is that the Iranian military were on high alert following the attack on the US bases and they may have mistaken the civilian airliner for an incoming American warplane.

Iran has firmly denied that its air defenses brought down the jet, even if by accident. The head of Iran’s aviation authority, Ali Abedzadeh, contends that it was “impossible” for a missile to have hit the aircraft and for it to have travelled for another minute and a half before crashing. It should have been blown out of the sky immediately, it is suggested.

He also pointed out that Iran’s military defenses and its civilian air traffic control work in close coordination, and therefore would have avoided any misidentification of Flight PS752.

Ukrainian authorities, from where the plane was commercially operated and to where it was destined to fly on the fatal morning, have not ruled out other possible explanations. They say a missile may have been the cause, but there are also three other working theories: a terrorist event onboard, such as a bomb; a mid-air collision with a drone; or a technical engine fault.

Iran is claiming that the crash was caused by a technical problem on the aircraft. However, the particular Boeing model was less than four years old and was serviced two days before the crash.

There seems to be an attempt to blame the Iranians before investigators have had a chance to fully examine the wreckage and the recovered black boxes. If the pilot made last-second remarks before crashing, the recordings in the black boxes should shed light on what actually happened. That may take weeks to resolve.

The rush to create an explanatory narrative citing Iranian missiles is similar to the way Western governments jumped to premature claims that Russian-backed rebels in eastern Ukraine allegedly shot down the Malaysian airliner MH-17 in July 2014. Western media, fed by the dubious Western intelligence tool, Bellingcat, assert that Russia and the Ukrainian rebels were complicit in that disaster. By contrast, there is evidence that the Western-backed Ukrainian army was culpable. But in the information warfare, the Western media spin has attributed the blame to Russia and the rebels, stonewalling any altnerative narrative.

Likewise, in the latest air disaster Iran is being fingered at the earliest opportunity to take the blame.

Suspiciously, the narrative is being railroaded by Western intelligence before any chance to objectively establish the facts and circumstances of the accident. Tellingly too, Bellingcat has weighed in at an early stage to reinforce Western intelligence accusations against Iran.

Obviously, if Iran is slated to take the blame, then it will be undermined internationally in the wider geopolitical stand-off with the US.

Who knows, perhaps the civilian airliner was taken down by an air-defense missile fired in error. But surely, it would be appropriate to let the investigators do their job. It is suspicious that Western intelligence and governments have hurried to lay the blame.

Which brings us back to the New York Times and the 19-second video it published purporting to show a missile strike on the aircraft. The video is credited by the newspaper to an Iranian person by name, who appears to have been standing in an apartment complex in the Tehran suburb of Parand. Maybe investigators should enquire about this person’s background. The NY Times claims it had the video verified and the location from which it was taken identified by satellite – within hours of the crash. That’s super-efficient don’t you think?

A top question is this: why would someone be filming an airliner which was hardly visible in the pre-dawn darkened sky at 6am just seconds before a missile allegedly hits the aircraft? The timing and position sounds too good to be merely a random opportunity.