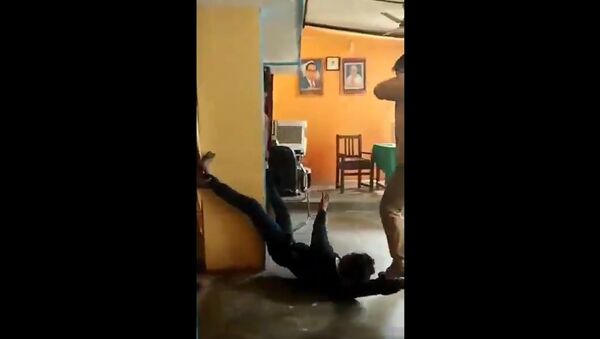 New Delhi (Sputnik): While the Indian state of Uttar Pradesh has the worst track record for custodial deaths, a viral video clip of a man allegedly being tortured has sent chills down the spine, with angry reactions pouring in on social media. Custodial death refers to the death of a person in police custody due to torture.

The leaked video footage from an Uttar Pradesh Deoria district police station has revealed the alleged torture of a man, held on suspicion of mobile theft.

The video of cops brutally thrashing the man inside the police station has gone viral on social media, raising concerns over increased custodial deaths in the state.

In the graphic video clip, cops are seen whipping the man with belts while two other cops stretch his legs wide against the wall. Another officer could also be seen standing on the man’s neck with his shoes.

The video clip shows at least four policemen inflicting torture on the man, who pleaded for mercy the whole time.

Three police personnel were suspended and a case has been registered after investigating the viral video, the police clarified in a tweet.

The leaked video attracted condemnation by social media users who slammed police for torture in custody.

Are these humans in uniform??
Law & order is joke in UP..
Police acting as criminals as shown in movies..
Accountability is missing..
In developed country they would have been suspended by now.. But this is india..

Painful to see BR Ambedkar & Mahatma Gandhi Pictures on the wall above & below the policemen are ruthlessly crushing their teachings.

Some among our citizens are sadists,when given power over others they do this without fail.Even a colleague can stop that but doesn’t b/c he is also a sadist.Islamic countries have codified this type of sadism through laws but result in human suffering equally.Lack of conscious.

Uttar Pradesh has the worst record for custodial death, or the demise of a detained person convicted or on trial, with 365 cases according to data available with the National Human Rights Commission (NHRC) – a statutory national watchdog on human rights.