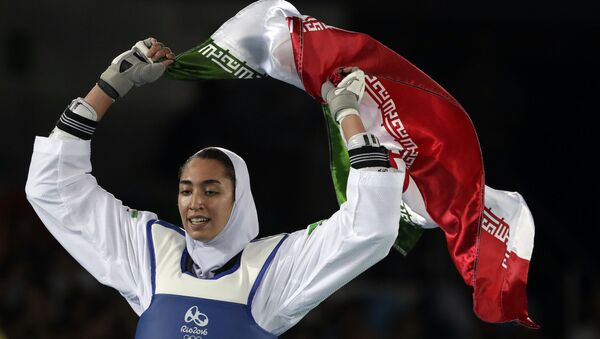 Iran’s only woman to have ever won an Olympic medal, taekwondo fighter Kimia Alizadeh, is believed to have emigrated to the Netherlands, according to unconfirmed recent reports.

Alizadeh won a taekwondo bronze medal at the Rio Olympics in 2016, garnering widespread support and praise from Iranian President Hassan Rouhani and other public officials. Alizadeh, who was 18 at the time, competed while wearing a headscarf.

On Thursday, the Iranian Students News Agency, an outlet loosely affiliated with the government, published a report stating that Alizadeh has emigrated to the Netherlands. However, that statement has not yet been confirmed. According to ISNA’s report, the coach of Iran’s national taekwondo team said that Alizadeh has suffered an injury.

Local Iranian media outlets have also speculated that Alizadeh is training in the Netherlands and will represent a different country in the 2020 Tokyo Summer Olympics.

A photo recently shared on Twitter by Iranian outlet Aseman Daily News shows a woman purported to be Alizadeh standing with a group of men and women while not wearing a headscarf.

​According to AFP, Iranian Member of Parliament Abdolkarim Hosseinzadeh accused the country’s “incompetent officials” of permitting Iran’s “human capital” to leave the country. Hosseinzadeh also compared Alizadeh to Iranian chess player Alireza Firouzja, who attained the title of grandmaster at age 14 after winning an Iranian national chess championship at age 12. He now resides in France.