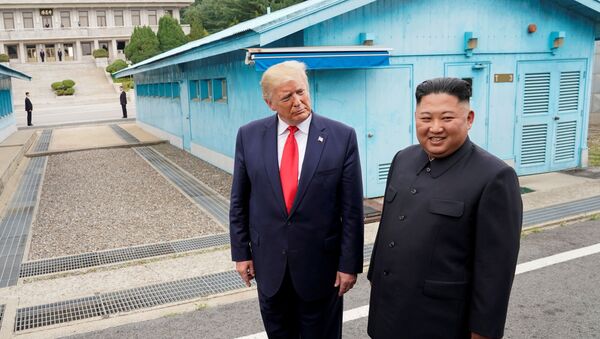 Trump became the first sitting US president to visit North Korea as part of his attempts to improve relations with the pariah state and resolve a long-time nuclear crisis. Trump managed to establish friendly ties with the North Korean leader in what the media dubbed a bromance.

US President Donald Trump has sent a birthday message to North Korean leader Kim Jong-un, said South Korean National Security Advisor Chung Eui-Yong. Speaking with reporters, the official, who met with POTUS this week, said he had been given a message to pass to North Korea, which was delivered to Pyongyang on Thursday.

"The day we met was Kim Jong-un's birthday and President Trump remembered this and asked me to deliver the message", said Chung Eui-Yong.

Kim Jong-un and Trump managed to establish friendly relations in 2018 after spending months trading insults and aggressive statements. Trump became the first sitting US president to set foot on North Korean soil. Improved relations between Pyongyang and Washington resulted in North Korea’s decision to issue a moratorium on nuclear and intercontinental ballistic missile tests and a desire to pursue denuclearisation. Media reports say that the bromance between the two politicians may be over as Kim Jong-un has recently vowed to resume missile tests and even threatened to send an unwanted “Christmas gift” to the United States.

Despite apparent tensions between the US and North Korea, President Trump said he believes that Kim Jong-un will honour his commitments on denuclearisation.