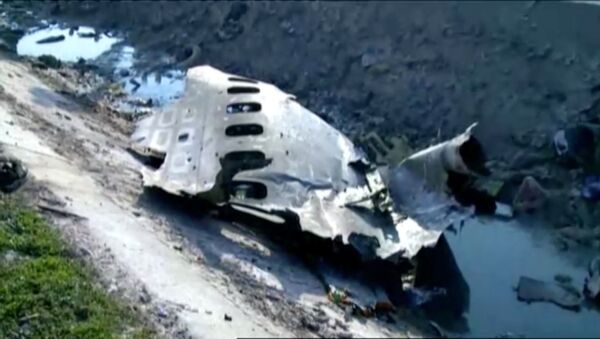 New footage published and “verified” by the New York Times shows what the Western outlet claims to be an Iranian missile striking a Ukrainian jet just moments after takeoff in Tehran, Iran.

The 19-second clip published by the New York Times on Thursday afternoon shows a small explosion in the sky of Parand in Tehran that is believed to be an Iranian missile hitting the Ukrainian Boeing 737-800 Flight PS752, which crashed early Wednesday morning after taking off from Tehran's Khomeini Airport.

#Breaking: Just in - Confirmed video footage of the moment the Ukrainian Boeing had been shot down by Iranian air defence systems. #Iran #Iraq #US #Ukraine pic.twitter.com/qVhUiCT7nf

A loud booming sound can be heard in the distance seconds after the flash.

Iran has maintained that the January 8 crash of the airliner, which claimed the lives of 167 passengers and nine crew members, was due to a technical error. Ukrainian Secretary of the National Security and Defence Council Oleksiy Danilov, on the other hand, said it may be attributable to three scenarios in addition to a possible technical malfunction: collision with another aircraft, a terrorist attack or an air defense missile strike.

Ukrainian President Volodymyr Zelenskyy announced Wednesday that the crash “is not a topic for hype, likes in social networks, sensations and conspiracy theories,” and called for patience, endurance and wisdom.

“We have intelligence from multiple sources, including our allies and our own intelligence. The intelligence indicates that the plane was shot down by an Iranian surface-to-air missile. This may well have been unintentional,” he told reporters during a press conference in Ottawa, Canada.

That announcement came just hours after US President Donald Trump said that he had his own suspicions on the matter and asserted that someone “could have made a mistake,” as the plane was being operated “in a pretty tough neighborhood.”

"This story of a missile striking a plane cannot be correct at all. Such rumors make no sense,” he contended.

Tehran-based Fars News Agency cited the official as having said the rumors were also “scientifically impossible” and have “no logic,” according to a translated tweet on the matter.

“There is complete coordination between all military and civilian sectors in Iran and at the same time,” the outlet noted in a followup tweet referencing the aviation official. “There were dozens of Iranian and foreign planes flying over Iran's safe space.”

According to Abedzadeh, Iranian and Ukrainian specialists are “downloading information” from the jet’s black boxes to further investigate the matter. Tehran has also asked a representative from Boeing to join the investigation, but economic sanctions imposed on Iran by the US may present an issue.

When crippling US sanctions make it difficult to investigate a plane crash: “Sanctions against Iran prevent Boeing from contacting the Iranians without an export license, they said.” https://t.co/WsnOnb0SGB

While Iran has expressed interest in getting in contact with Boeing, the New York Times reported that the National Transportation Safety Board of the United States has to first discuss the matter with the State Department due to sanctions which restrict Boeing, a US-based corporation, from contacting Iranians "without an export license."

"All these reports are a psychological warfare against Iran," Ali Rabiei, a spokesman for the Iranian government said on Thursday, reported Reuters, citing state TV. "All those countries whose citizens were aboard the plane can send representatives and we urge Boeing to send its representative to join the process of investigating the black box."