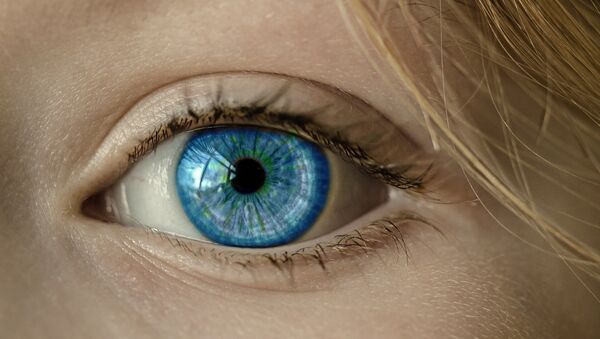 Many patients see flashes of light in front of their eyes during radiation therapy, even with closed eyes, and now these flashes have been caught on camera for the first time.

A new study reveals that enough light is being produced inside the eye to cause these visual sensations, known as Cherenkov emissions or Cherenkov radiation, the same effect that causes nuclear reactors to glow blue when they're underwater. Light is generated when the radiation beam passes through the vitreous fluid or the clear gel of the eye, according to the new evidence.

"Our newest data is exciting because for the first time, light emission from the eye of a patient undergoing radiotherapy was captured," says Irwin Tendler, a biomedical engineer from Dartmouth College. "This data is also the first instance of evidence directly supporting that there is enough light produced inside the eye to cause a visual sensation and that this light resembles Cherenkov emission."

Cherenkov emission had earlier been only one of many hypotheses. The team behind the new study used a special camera imaging system called CDose, catching the effect on camera. The patient studied did indeed report seeing light flashes during the experiment. Follow-up tests on pig eyes were able to confirm the composition of the light and identify it as Cherenkov radiation.

"Our real-time data rigorously showed that the amount of light produced is sufficient to elicit a visual sensation – a topic that has been debated in the literature," says Tendler. "By analysing the spectral composition, we also show that this emission can be classified as Cherenkov light – again, another contested point in the literature."

The research has been published in the International Journal of Radiation Oncology, aiming to enable future radiotherapy techniques to be improved: for example, detection of Cherenkov emission could be used as a sign that treatment has or has not hit its intended target. The scientists also saw a correlation between whether patients see light flashes and whether they subsequently experience any vision loss.

"Although theories regarding direct nerve stimulation, scintillation of the lens, and ultraweak bioluminescent photons cannot be ruled out, it seems clear that Cherenkov light production throughout the eye is quantifiable and significant," conclude the researchers in their published paper.