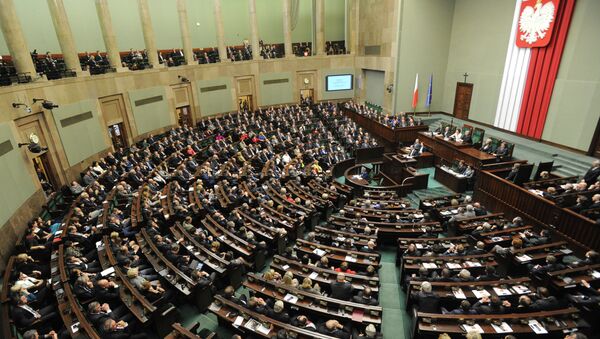 WARSAW (Sputnik) - The lower house of the Polish parliament on Thursday adopted a resolution stating that the Soviet Union bears equal blame with Nazi Germany for the beginning of World War II.

"The Sejm of the Republic of Poland condemns the provocative and false statements of representatives of the highest Russian authorities who are trying to hold Poland responsible for starting World War II," the resolution says.

According to the document, the greatness of a nation and relations between countries cannot be built on lies and the falsification of history.

Sponsors of the resolution argue that "two totalitarian powers provoked the beginning of World War II — [Adolf] Hitler's Germany and [Joseph] Stalin's Soviet Union; and after the conclusion of the infamous Molotov-Ribbentrop Pact in Moscow on August 23, 1939, Poland and countries in Central and Eastern Europe became first victims of both totalitarian regimes."

Poland is extremely dissatisfied with a recent statement by Russian President Vladimir Putin, who called Polish Ambassador to Nazi Germany Jozef Lipski a "bastard and anti-Semitic swine" for supporting Hitler and his idea of ​​expelling Polish Jews to Africa "for extinction and extermination." In late December, the president read excerpts from a report Lipski had compiled for the foreign ministry at that time, in which the ambassador suggested that a monument to Hitler be built if the Nazis' deportation plans were carried out.

The speaker of the lower house of the Russian parliament, Vyacheslav Volodin, subsequently said that Poland should apologize for such statements made by former officials. On December 28, Russian Ambassador to Poland, Sergey Andreyev, said that he had been summoned to the Polish Foreign Ministry over Putin's remarks.