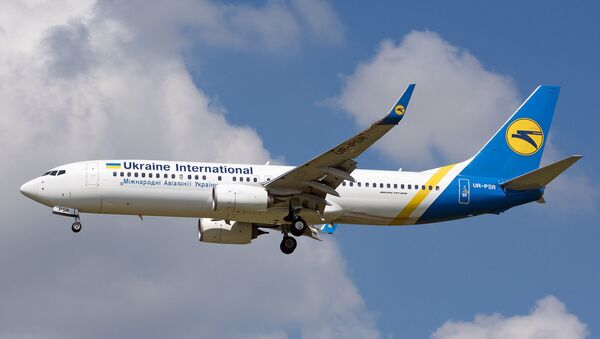 Ukrainian President Volodymyr Zelensky has urged people to refrain from manipulation, speculation, conspiracy theories, hasty evaluations, and unverified versions regarding the UIA Boeing 737-800 that crashed near the Iranian capital, Tehran, shortly after take-off on Wednesday.

"This is not a topic for hype, likes in social networks, sensations and conspiracy theories. We need patience, endurance, and wisdom", stated Zelensky, who earlier declared 9 January a day of mourning in Ukraine.

A total of 167 passengers as well as nine crew members were on board the aircraft when it crashed. Everyone aboard was killed in the tragic incident as the plane became engulfed in fire mid-flight, the head of Iran's Emergency Department said.

The majority of passengers were Iranians and Canadians, 82 and 63 respectively. Ten Swedes, 4 Afghans, 3 Germans, and 3 Brits were also on board. There were 11 Ukrainians on the flight, 9 of whom were members of the crew.

The United States has shared intelligence with Canada indicating that the ill-fated Ukrainian International Airlines flight was shot down and Canadian authorities regard the information as "credible," CBC reported on Thursday.

Ottawa regards Washington's assessment that the plane was "accidentally shot down by an Iranian missile" as "credible," the report said, citing government sources.

"I have my suspicions. I don’t want to say that because other people have those suspicions also. Somebody could have made a mistake on the other side [Iran]," Trump told reporters. "Some people say it was mechanical. I personally don’t think that’s even a question."

17:10 GMT 09.01.2020
US Officials Believe Ukrainian Plane Was 'Most Likely' Accidentally Shot Down by Iranian Air Defence

Iran Denies 'Illogical Rumours' as US Officials Say Ukrainian Boeing May Have Been Downed by Missile
16:50 GMT 09.01.2020
Zelenskyy Expresses Gratitude to Iran for Speed, Transparency of Plane Crash Investigation

"I had a telephone call with @HassanRouhani. I am grateful to Iran for its willingness to collaborate and provide prompt access to all necessary data to Ukrainian specialists. Deep condolences to the families and relatives of all Iranians who died in the airplane crash in Tehran," Zelenskyy wrote on Twitter.

"The President invited the United Kingdom to join the investigation. Boris Johnson supported this idea and stressed that the best British experts should be involved," the Ukrainian presidential office said.

"Canadian Foreign Minister François-Philippe Champagne had a phone conversation with his Iranian counterpart Mohammad Javad Zarif on Thursday morning. During the phone call, the two sides conferred about the recent crash of a Ukrainian plane in Tehran as well as other issues of mutual interest", a statement from Iran's Foreign Ministry reads.

The Russian Embassy in Iran said that Tehran did not seek Moscow's help in investigating the causes of the Ukrainian Boeing 737 crash.

"No, [the Iranian side] did not ask [for our help]", the embassy said.

"It is impossible to announce any opinion over the reason; we have formed a team to investigate the crash's causes. We will announce the final results in the near future", a senior source in Iran's Civil Aviation Organization told Sputnik, adding that the specialists had already begun their initial analysis of the black box.

Secretary of Ukraine's National Security and Defence Council Oleksiy Danilov said that an anti-aircraft missile attack, as well as a terror attack leading to an explosion or technical malfunction could be behind the crash of Ukrainian International Airlines' Boeing 737.

"A conference with the representatives of Iran's competent bodies, including the International Civil Aviation Organisation, is now underway. Different possible reasons behind the sudden falling of the aircraft are being studied. Here are some key ones: an attack by an anti-aircraft missile — including the Tor missile, as information that fragments of the Russian missile were found near the site of the crash has already emerged on the internet; — a collision with a drone or another flying object; engine destruction and explosion due to technical reasons; and an explosion inside the plane as a result of a terror attack", NSDC Secretary Oleksiy Danilov said, according to Ukrainian news portal Censor.net.

"A plane with Ukrainian experts arrived in Tehran on January 9, at 3:30 [Kiev time, 01:30 GMT] ... The expert group has urgently started looking into the circumstances of the crash of Boeing 737 flight PS752", the Ukrainian National Security and Defence Council said in a statement on Thursday.

Tehran has presented its preliminary report on the Ukrainian Boeing 737 crash indicating that a fire occurred on the aircraft prior to its collapse, but the pilots did not report any malfunction, according to Iran's Civil Aviation Organisation.

"The preliminary report has been presented to Ukraine, where the aircraft is registered, to the United States as a producer, and to Canada and Sweden, whose citizens were on board, at their request", the organisation said in a statement.

The report also specified that according to eyewitness accounts the plane caught fire while it was still in the air.

Israeli Foreign Minister Israel Katz has sent his "deepest" condolences to the people of Ukraine, Iran, and Canada over the recent plane crash near Tehran International Airport that took the lives of 176 people. The minister posted the statement on his Twitter account in Ukrainian, Arabic, and English.

I am deeply saddened to hear the tragic news about Ukraine International flight 752.

My thoughts are with the people of Ukraine, Iran, Canada and all those who lost loved ones.

On behalf of the people of Israel we send our deepest condolences.

"The plane, which was initially headed west to leave the airport zone, turned right following a problem and was headed back to the airport at the moment of the crash," AFP cited the Iranian Civil Aviation Organisation as saying.

06:09 GMT 09.01.2020
Zelensky to Hold Phone Talks With Rouhani to Discuss Ukrainian Plane Crash Near Tehran
Newsfeed
0
New firstOld first
loader
LIVE
Заголовок открываемого материала
Access to the chat has been blocked for violating the rules . You will be able to participate again through:∞. If you do not agree with the blocking, please use the feedback form
The discussion is closed. You can participate in the discussion within 24 hours after the publication of the article.
To participate in the discussion
log in or register
loader
Chats
Заголовок открываемого материала
Worldwide
InternationalEnglishEnglishMundoEspañolSpanish
Europe
DeutschlandDeutschGermanFranceFrançaisFrenchΕλλάδαΕλληνικάGreekItaliaItalianoItalianČeská republikaČeštinaCzechPolskaPolskiPolishСрбиjаСрпскиSerbianLatvijaLatviešuLatvianLietuvaLietuviųLithuanianMoldovaMoldoveneascăMoldavianБеларусьБеларускiBelarusian
Transcaucasia
ԱրմենիաՀայերենArmenianАҧсныАҧсышәалаAbkhazХуссар ИрыстонИронауОssetianსაქართველოქართულიGeorgianAzərbaycanАzərbaycancaAzerbaijani
Middle East
Sputnik عربيArabicArabicTürkiyeTürkçeTurkishSputnik ایرانPersianPersianSputnik افغانستانDariDari
Central Asia
ҚазақстанҚазақ тіліKazakhКыргызстанКыргызчаKyrgyzOʻzbekistonЎзбекчаUzbekТоҷикистонТоҷикӣTajik
East & Southeast Asia
Việt NamTiếng ViệtVietnamese日本日本語Japanese中国中文Chinese
South America
BrasilPortuguêsPortuguese