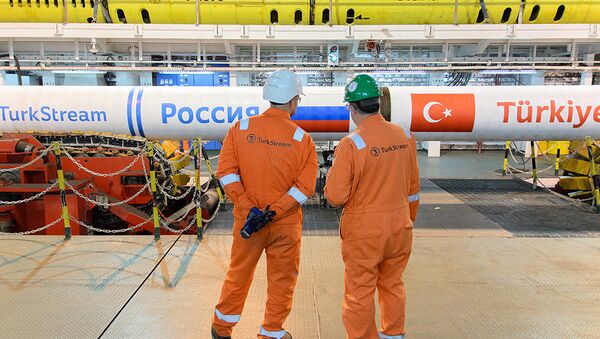 © Photo : turkstream.info
Subscribe
MOSCOW (Sputnik) - A long-awaited launch of the joint Russian-Turkish gas pipeline project, TurkStream, promises new energy prospects not only for the European Union but for the entire region, offering diversified gas supply options and a growing market, as well as enhanced cooperation between Ankara and Moscow, experts said on Wednesday.

The inauguration ceremony of the project's launch was held in Istanbul earlier in the day in the presence of Turkish and Russian presidents, Recep Tayyip Erdogan and Vladimir Putin, along with Serbian leader Aleksandar Vucic and Bulgarian Prime Minister Boyko Borissov.

The decision to construct such a pipeline was made after Russia announced that it was scrapping the South Stream gas pipeline project because of the European Union’s non-constructive position.

The South Stream pipeline was to run along the bottom of the Black Sea from the Anapa region to the Bulgarian port of Varna and further across Bulgaria, Serbia, and Hungary. 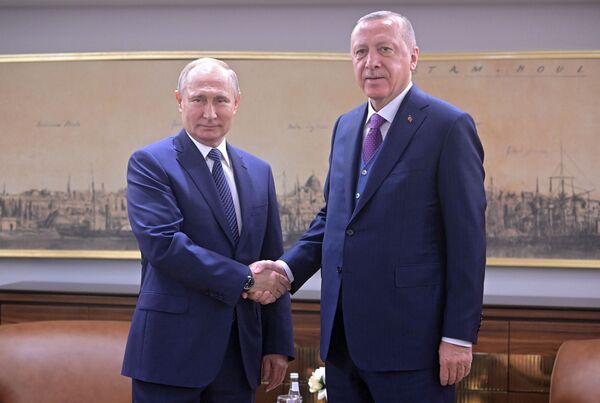 On December 1, 2014, Russia’s Gazprom and Turkish Botas Petroleum Pipeline Corporation signed a Memorandum of Understanding on building the pipeline.

The TurkStream project consists of two lines, each capable of transporting 15.75 billion cubic meters (556 billion cubic feet) a year, with its first leg delivering gas to Turkish consumers and the second to Southern and Southeast Europe.

Ralf Dickel, a senior visiting research fellow at the Oxford Institute of Energy Studies, said that in his point of view, the significance of the TurkStream lied in the diversification of Gazprom's energy supply routes to Europe and not just through Ukraine.

"Given that the transit contract with Ukraine has been prolonged by five years, this does not seem to have an immediate effect, also in view of the delays in the downstream prolongation of TurkStream through Bulgaria. In the medium term, Turkstream offers more options to southeast Europe and pending a connection to Italy," Dickel said.

Huseyin Bagci, a professor of international relations at the Middle East Technical University in Ankara, in his comments called TurkStream one of the most important projects both for Turkey and Southern Europe as well as one of the best examples of cooperation between Ankara and Moscow.

As for the chances of Turkey becoming a regional energy hub, Dickel said he doubted its potential of becoming one.

"I am critical because you would need a flexible market and risible storage capacity, which I do not see for the time being in Turkey," the expert said.

Abdullah Bozkurt, president of the Stockholm Centre for Freedom said that the TurkStream helps Turkey as a transiting country to earn some money on the deal in the meantime.

"The TurkStream strengthens Russia's hand and solidifies its position as a supplier in the European market and helps Turkey as a transiting country to earn some money on the deal in the meantime. Through an increased presence in south-eastern Europe’s energy market, Russia has also expanded its political clout in the region where NATO has been trying to woo countries through membership and partnership projects and build alliances against Russia," the expert said.

"It is also worth to note that the Black Sea - where Russia and Turkey have so far tried to manage dominance on the sea on a relatively balanced level while the US-led NATO bloc of countries has been pushing for an increased alliance-wide presence there – becomes a strategically more important place now," Bozkurt added.

According to Dickel, TurkStream will add to the supply options for southeast Europe and will serve to develop the market for the entire region.

"As for Turkey, I believe they are well supplied with gas for some time to come. The stop of transit volumes might have some implications on gas supply within the south of Ukraine, e.g. to Odesa [a port city in southern Ukraine]," Dickel added.

When asked about the possible implications of US sanctions, following US President Donald Trump's $738 billion National Defense Authorization Act, which proposes sanctions against the Nord Stream 2 and TurkStream gas pipelines, Bagci expressed full assurance that nothing would complicate the project's operation.

The Russian and Turkish presidents have been working on boosting bilateral trade since the 2010s. Despite occasional setbacks, such as the downing of a Russian Su-24 fighter jet in 2015, which cooled relations between Moscow and Ankara for a while, the sides continue moving in a positive direction.

000000
Popular comments
This is a perfect example of win-win for Turkey, Russia and Europe we hope to see many more of these to liberate the world from mendacious and thieving Americans.