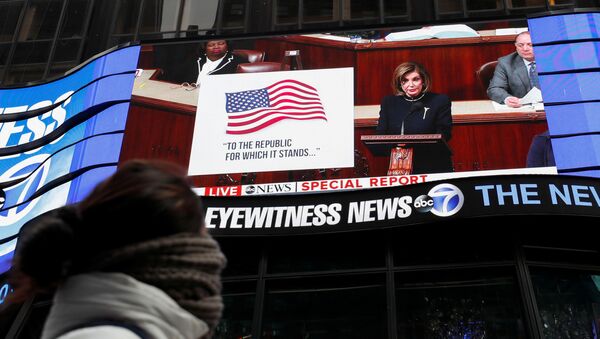 © REUTERS / SHANNON STAPLETON
Subscribe
POTUS brought up House Speaker Nancy Pelosi’s initiative regarding military operations, labelling it “presidential harassment” and “Democrat fraud”, accusing Pelosi, in turn, of having not consulted the Senate before launching the impeachment proceedings against him.

House Democrats are poised to vote Thursday on a war powers resolution that would limit Trump’s hypothetical ability to declare war against Iran without congressional approval in what appears to be yet a new development in the tense US-Iranian standoff.

“Members of Congress have serious, urgent concerns about the administration’s decision to engage in hostilities against Iran and about its lack of strategy moving forward. Our concerns were not addressed by the president’s insufficient War Powers Act notification and by the administration’s briefing today”, House Speaker Nancy Pelosi (D-Calif.) said when announcing the upcoming vote.

Trump instantly reacted to the initiative, expressing hope that House Republicans will block the resolution, recounting Nancy Pelosi’s recent “speed and rush” to get impeachment “voted on and done”.

Hope that all House Republicans will vote against Crazy Nancy Pelosi’s War Powers Resolution. Also, remember her “speed & rush” in getting the Impeachment Hoax voted on & done. Well, she never sent the Articles to the Senate. Just another Democrat fraud. Presidential Harassment!

The House resolution would require Trump to end hostilities against Iran unless Congress okays a war or any other action to thwart “an imminent threat”, with the collocation used by Trump as a reason for the US’ killing of Iranian top-ranking commander Qasem Soleimani.

“I believe there was no rationale that could pass a graduate school thesis test”, he said. “I was utterly unpersuaded about any evidence about the imminence of a threat that was new or compelling”.

Meanwhile, more briefings are expected to come along, or at least a second one. Senate Minority Leader Charles Schumer (D-N.Y.) has asked for another Iran briefing with the same administration officials in the next few days, noting that only 15 senators were able to ask questions on Wednesday.

“As the questions began to get tough, they walked out”, Charles Schumer pointed out.

In the meantime, Nancy Pelosi is considering additional legislation, including a repeal of the 2002 Authorisation for the Use of Military Force (AUMF) and laws to stifle funding for any military activities against Iran.

For the time being, the two countries are in no direct military confrontation. After Tehran's retaliatory attack, in response, Trump announced more stifling economic sanctions while also bragging about Washington's "big and accurate" missiles as well as the achievements during his tenure.

He separately praised the "new powerful economic sanctions" aimed at Iran, promising that they would be in place until Tehran "changes its behaviour", noting that he would prefer NATO to be more involved in the Middle East.