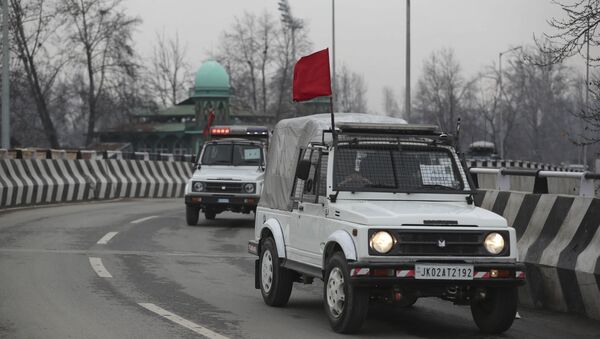 New Delhi (Sputnik): A group of 15 foreign envoys commenced their guided tour on Thursday in Jammu and Kashmir. They include representation from the US, South Korea, Vietnam, Bangladesh, Fiji, Maldives, Norway, Philippines, Morocco, Argentina, Peru, Niger, Nigeria, Guyana, and Togo.

In view of the European Union diplomats turning down India’s invitation to be part of a guided tour of Kashmir recently, India's External Affairs Ministry has clarified that these foreign envoys can have free interactions once the situation improves in Kashmir.

Indian External Affairs Ministry spokesperson Raveesh Kumar on Thursday said: “This is not the end of the visit. There was a constraint of numbers due to short notice. If we see progressive development, we are going to see more diverse interaction with the groups that will visit Jammu and Kashmir”. Adding that the government wanted the group to be of manageable size, the spokesperson said: “When we approached them they welcomed the decision. Our understanding is that they wanted to visit in a group. You're aware, on many issues they take group position. Invitation wasn't sent to all members because it would have made the delegation too big”.

Sources have pointed out that the European Union wanted unrestricted movement in the region for an on-the-ground situation in the valley in the aftermath of the revocation of Jammu and Kashmir’s decades-old special status, which had given it quasi-autonomy for years.

On the visit, organised at the request of foreign envoys in New Delhi, Kumar said: “Our consistent position has been that any visit to the Union Territory of J&K by foreign dignitaries will be based on assessment by local administration on the prevailing security situation”.

Meanwhile, during today’s visit of foreign envoys, a series of meetings were held between them and security officials, while discussions were held on challenges to security and the threat of terrorism.

It was followed by interactions with civil societies from diverse backgrounds, media, and a group of political leaders of the country. It was announced that more meetings will take place on 10 January before the delegation returns to Delhi.

The government said that the objective for the visit is to make envoys see the steps taken by the Indian government and its first-hand impact to normalise the situation in Kashmir.

The Indian government-facilitated visit of the 15 New Delhi-based envoys will last two days – 9 and 10 January.

The newly formed territory of India, Jammu and Kashmir, has been grappling with turmoil ever since the Indian government revoked Article 370 on 5 August.

The Kashmir region has been a bone of contention between India and Pakistan. Both nuclear-armed neighbours claim Kashmir in full, but govern it in part.