Fatal Waltz: Exoplanet Spiraling Towards Its ‘Death’ Spotted for the First Time Ever 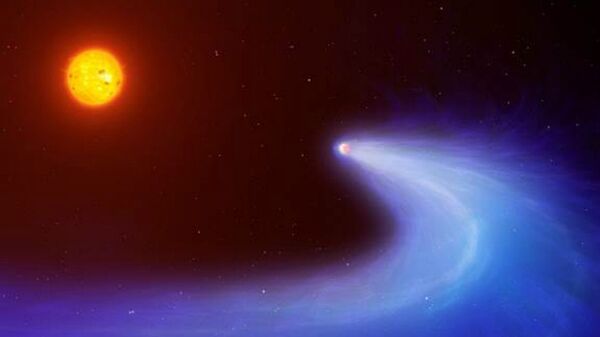 Researchers discovered the WASP-12b in 2008 using a transit method technique – observing dips in the brightness of stars, which means that they are orbited by planets.

Scientists have for the first time identified an exoplanet that is spiraling towards its demise, according to research published in the Astrophysical Journal Letters on 27 December. WASP-12b belongs to a type of planet called hot Jupiters. They are physically similar our solar system's fifth planet, but have very short orbital periods, resulting in close proximity to stars and high temperatures, hence the moniker hot Jupiter.

Researchers have long suspected that having a close proximity to stars eventually brings about the demise of hot Jupiters as they get too close to hot stars, which then rip them apart. Scientists, however, had no inkling of how long this fatal waltz could last.

"We were pretty sure they could not last forever. The strong gravitational interactions between the planet and the star should cause the planet to spiral inward and be destroyed, but nobody could predict how long this takes. It might be millions of years, it might be billions or trillions", Joshua Winn, a professor of astrophysical sciences at Princeton and one of the paper’s authors said.

Scientists say that WASP-12b is the first planet that would confirm their hypothesis about the fate of hot Jupiters and researchers say the planet in the constellation Auriga will meet its end in about 3 million years. Samuel Yee, lead author and a graduate student in astrophysical sciences, said: "If we can find more planets like WASP-12b whose orbits are decaying, we’ll be able to learn about the evolution and eventual fate of exoplanetary systems".