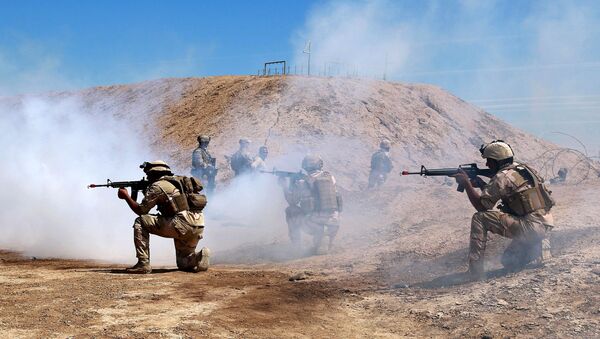 © AP Photo / Hadi Mizban
Subscribe
Concerns have risen recently about the situation in the Middle East after Iran conducted airstrikes against US military facilities in Iraq as "revenge" for killing its top military commander Qasem Soleimani. The tensions, however, have de-escalated after President Trump did not announce any retaliatory military action against Iran.

Australian premier Scott Morrison has announced he is not going to withdraw troops from Iraq and that Australia will continue its mission in the country, Reuters reported on Wednesday.

"Our goal remains a united, stable Iraq and the focus of our efforts is countering Daesh* and its support network. That remains our mission and we remain tasked to that mission as our people there in the Middle East are pursuing, Morrison said in an address from Canberra cited by Australian SBS News.

He added that no Australian personnel was killed or injured in Iran's attack on the US military bases in Iraq. About 300 Australian troops and defence staff are now deployed in the country, the outlet said.

"Australia wants to see and has encouraged restraint and de-escalation and I welcome President [Donald] Trump's statement overnight", Morrison said, referring to the US president's address to the nation on Wednesday morning.

The premier also said that an Australian naval vessel would travel to the Strait of Hormuz this week as planned for shipping protection in the region, according to Reuters.

On early Wednesday, Iran's Revolutionary Guards Quds Force attacked US military facilities in Erbil in Iraqi Kurdistan and the al-Assad Air Base in western Iraq as part of its "hard revenge" for Gen. Qassem Soleimani, who was killed in the US targeted attack on the Baghdadi International airport.

Addressing the nation on Wednesday, US President Trump said he would ask NATO to boost its involvement in the Middle East.

Earlier this month, the Iraqi parliament demanded that all foreign troops withdraw from the country. The US said its forces were staying, dismissing the message on social media about the pullout of the international coalition as a mistake.

There also have been reports about Germany's intent to pull out its troops from Iraq amid concerns over US-Iran tensions, which have escalated after the elimination of Soleimani.

000000
Popular comments
Australian PM needs to shut the hell up and take care of his own country which is burning to the ground quite literally.
Putinlover
9 January 2020, 06:08 GMT
000000
Australia is very scared of China and needs to please the US so they can be protected. That's probably why Australia wants to stay. It's a possible sign of Australia's desperation with China. China take note of the fearfulness of Australia. But the Iraqi parliament has voted for foreigners out and Trump provided an exit strategy that is very doable: pay for Al-Asad base.