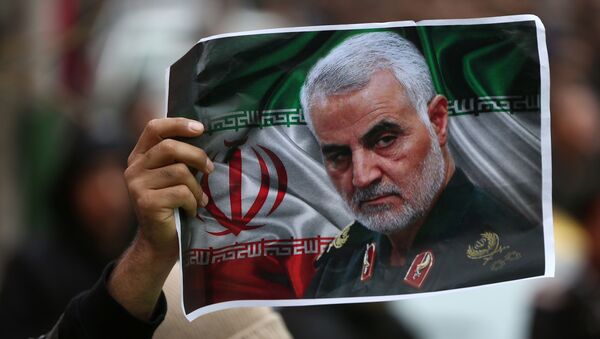 Several US lawmakers took to social media and the press Wednesday afternoon to express uncertainty in US President Donald Trump and the Pentagon’s purported justification behind the recent killing of Iranian Quds Force commander Gen. Qasem Soleimani.

US officials from both legislative houses met with top national security officials Wednesday afternoon for a closed-door briefing regarding the current tensions with Iran.

During the meeting, lawmakers and government officials discussed and debated the Pentagon and US president's assertion of a so-called "imminent threat" being the US military's reason for eliminating Soleimani.

Rep. Gerald E. Connolly (D-VA), who is a member of both the House Foreign Affairs and Oversight committees, slammed the briefing as "sophmoric and utterly unconvincing" and expressed that he believes Congress should act to protect the "Constitutional provisions about war and peace."

"I was ... utterly unpersuaded about any evidence about the imminence of a threat that was new or compelling," he said in reference to details laid out by Secretary of State Mike Pompeo, Secretary of Defense Mark Esper, CIA director Gina Haspel and Joint Chiefs General Mark Milley, according to the Washington Post.

Senator and Democratic presidential candidate Cory Booker (D-NJ) took to Twitter shortly after the Wednesday briefing and asserted that he still remains "deeply skeptical" of Trump's "justification for this attack" on Soleimani.

Just stepped out of a 75-minute briefing regarding President Trump’s military actions in Iraq—we were provided no evidence of an imminent threat. I remain deeply skeptical that he had justification for this attack.

On the other side of the political aisle, Senator Mike Lee (R-UT) was also dissatisfied with the way the security meeting was handled and expressed that he would be joining Democrats on the War Powers Resolution to restrict Trump's power to commit the US to an armed conflict, according to NBC News' Kelly O'Donnell.

However, when speaking to reporters following the briefing, Lee said his comments on the Friday killing of Soleimani's will be left for another day and instead took aim at the what he said is the, "worst briefing I've seen - at least on a military issue - in the nine years I've served in the United States Senate."

He noted that members of the executive branch instructed lawmakers to not debate or discuss matters regarding "the issue of the appropriateness of further military intervention against Iran."

.@SenMikeLee
: "It is not acceptable for officials within the executive branch of government…to come in and tell us that we can't debate and discuss the appropriateness of military intervention against Iran. It's un-American. It's unconstitutional and it's wrong." pic.twitter.com/fVSE6b3EM0

Though Trump and Pompeo have both dodged questions concerning how the administration was aware of an "imminent attack", Esper told reporters at the Pentagon on Tuesday that it was fair to say Soleimani's plot was "days" away from being carried out.