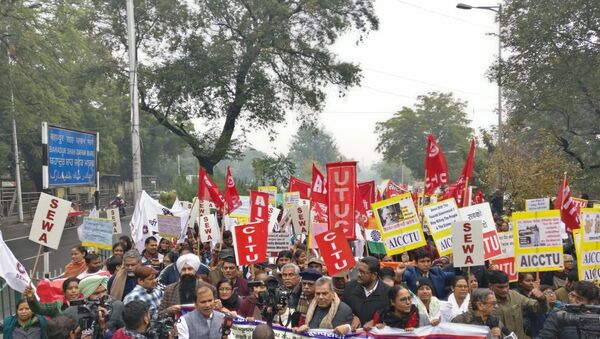 New Delhi (Sputnik): Indian trade unions and government employees have long been agitating against the Modi government’s policies, such as privatisation of state-run entities to deal with the ailing Indian economy.

The federal government has not responded to the agitation, but asked its departments to make a “Suitable contingency plan” for facilities to continue to operate smoothly. Senior officers have been asked not sanction any kind of leave for employees and officers during the protests.

“All officers are requested to no to sanction casual leaves or any other kind of leaves to officers and employees, if applied for, during the period of protests and ensure that the willing employees are allowed hindrance-free entry into the office", the statement said.

People in hundreds of number are protesting in ITO area of India's national capital New Delhi on Wednesday pic.twitter.com/R4ZWAsRh5I

It has also asked for information about employees who remain absent on the day of the strike.

Undeterred by government orders and supported by leaders from various opposition parties like the Indian National Congress and its leader Rahul Gandhi, 10 established trade unions have announced their participation in the shutdown.

Today, over 25 crore 🇮🇳workers have called for #BharatBandh2020 in protest.

​Protesters have blocked railway and road traffic in eastern West Bengal, governed by the opposition All India Trinamool Congress. Banking services are also likely to be hit, as thousands of bank employees have also decided to participate in the one-day shut down.

In a joint statement issued by the trade unions, the government was accused of having contempt for labour as “construed from its policies and actions”.

“It is more than four years since the last Indian Labour Conference (ILC) was held in July 2015. The last meeting of the Group of Ministers constituted to discuss the 12-point charter of demands was held in August 2015. Since then nothing has proceeded in that regard", reads the statement.

ILC is the top consultative committee, which falls under the jurisdiction of India’s federal Ministry of Labour and Employment and advises the government on issues relating to the country's working class.

The Modi government has been drawing flak for its decision to privatise several public-funded companies to lift up the crisis-ridden economy.

Finance Minister Niramala Sitharaman previously said that the economy might be facing a slowdown, but ruled out the possibility of a recession-like situation.

“Every step being taken is in the interest of the country", the minister said in Parliament in November.

The Indian economy has been in dire straits ever since the gross domestic product for the April-June quarter published by the federal government on Tuesday (7 January) revealed a six-year low of 5 percent.