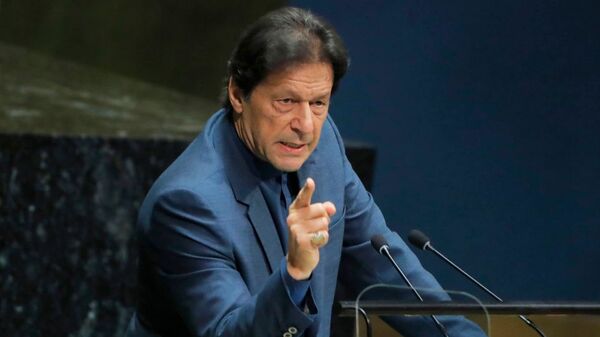 New Delhi (Sputnik): Iran launched an attack on US targets in Iraq on Wednesday by firing dozens of missiles to avenge the assassination of its top military commander General Qasem Soleimani by the US. Iraqi Prime Minister Abdul-Mahdi has warned the US that the ongoing crisis "threatens a devastating all-out war" in Iraq, the region, and the world.

Taking the ongoing US-Iran situation into consideration, Pakistani Prime Minister Imran Khan has expressed concern over the situation, saying there is a need to take immediate measures to de-escalate the situation.

Clarifying Pakistan’s stance on the situation, Khan asserted that his country would not become part of the US-Iran conflict while stressing that war is in nobody’s interest.

He also emphasised the need for maximum restraint and constructive engagement by all concerned to de-escalate the situation in the broader interests of peace and stability.

“Pakistan is a partner for peace and would continue to play its role in seeking to defuse tensions”, said Khan.

Khan mentioned Islamabad’s earlier attempts at restoring peace and facilitating contacts between the US and Iran, as well as between Tehran and Riyadh (Saudi Arabia), to resolve their differences.

This comes days after Pakistani Army spokesperson Major General Asif Ghafoor stressed that Pakistan would not allow anyone to use its soil to launch an attack and distanced itself from the conflict between Washington and Iran. He also said the country would not be party to anyone against peace.

Regarded as the second most powerful person in the country after its supreme leader Ayatollah Ali Khamenei and a mastermind of military and intelligence missions, General Soleimani was assassinated in a US drone strike in Baghdad along with Iraqi militia commander Abu Mahdi al-Muhandis. The strike by the US on Iran has flared tensions in the Gulf region.