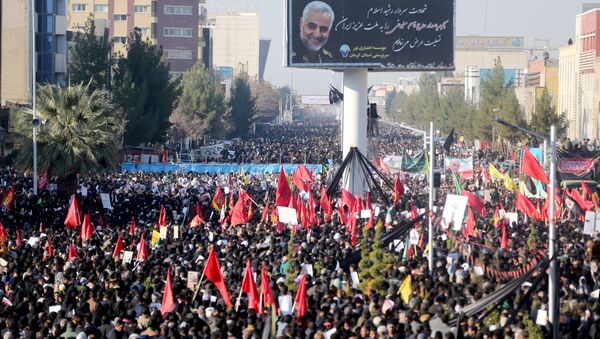 In retaliation for the US' killing of Iran's top-ranking elite force commander, Qasem Soleimani, late last week, in the early hours of Wednesday, Iran fired two missiles at US airbases in Iraq, targeting military personnel there. There are no exact details yet on the number of victims in the attack, with Iranian state television putting it at 80.

Iran's President Hassan Rouhani has taken to Twitter to praise late Quds Force's General Qasem Soleimani, and his efforts to "heroically fight against ISIS, Al Nusrah, and Al Qaeda", suggesting that but for his paisntaking moves, "European capitals would be in great danger now." He further specified what Iran is seeking in revenge for Soleimani's demise:

"Our final answer to his assassination will be to kick all US forces out of the region, "  Rouhani tweeted.

General Soleimani fought heroically against ISIS, Al Nusrah, Al Qaeda et al. If it weren’t for his war on terror, European capitals would be in great danger now.
Our final answer to his assassination will be to kick all US forces out of the region.

Earlier, the Gulf country's Supreme Leader Ali Khamenei branded the overnight missile attacks on US airbases in Iraq a "slap" in America's face, while commenting on the Islamic Republic's prompt response to the killing of the country's top-ranking Quds Force General Qasem Soleimani late last week in a US-launched high-precision drone attack.

He called out the US presence in the Middle East at large as "a source of corruption" arguin, in tune with Rouhani's vision, that the American forces must leave the region.

Iranian Foreign Minister Javad Zarif echoed the stance, arguing the US assessment of Tehran's missile attacks should not be based on "illusions" as they were carried out in "legitimate self-defence".

According to Iranian television, as many as 15 missiles were launched at US targets in Iraq killing 80 and "severely damaging" US' military equipment early on Wednesday, whereas the US side hasn't yet issued an official statement on the losses. Iran, for its part, remarked that its foces sustained no casualties, having been notified about the relationship.

General Soleimani was killed in a drone attack by US forces while in his car at the Baghdad Airport, in the aftermath of a controversy around the US embassy raid. President Trump ordered the attack citing the general's alleged complicity in preparing assaults on the US personnel in Iraq and beyond.