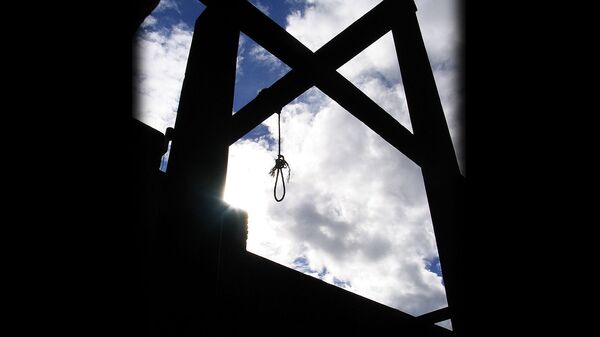 New Delhi (Sputnik): After a long wait of seven years, the Supreme Court of India on Tuesday issued a death warrant against four convicts, holding them guilty of raping and brutally assaulting a 23-year-old woman in a moving bus in Delhi in December 2012.

A day after a Delhi court announced the death sentence for four accused in a 2012 gang rape case, the Uttar Pradesh (UP) government said that it had approved a request to provide a hangman to the city’s jail authorities.

Uttar Pradesh state’s Minister for Jail Jai Kumar Singh revealed that they had been approached by Tihar Jail of Delhi with a request to provide a hangman from Meerut city jail - and they approved the same.

Jai Kumar Singh, Minister of State for jail: Tihar jail had written to avail the service of hangman from Meerut for the execution of Nirbhaya Rape case convicts. We have approved permission for the same. pic.twitter.com/bQj61q1Tbq

Authorities of Delhi’s Tihar jail, where the convicts in the rape and murder case are being held, were in talks with prisons in Uttar Pradesh to assign a hangman, as there are no executioners left at Tihar Jail – the largest prison the country.

A Delhi court has scheduled the execution of four convicts of the 2012 gang rape case for 22 January at 7 a.m. (India time). Meanwhile, the convicts have the option of filing a mercy petition with the country’s president.

The lawyers for Vinay and Mukesh said they were in the process of seeking the legal remedy of a curative petition in the apex court.

In total, six men were held by the Delhi Police for the fatal assault on “Nirbhaya” (a name given to the gang rape victim). Four are to be hanged, one allegedly committed suicide in jail during the trial, another accused who was a juvenile at the time of committing the crime walked free after serving three years in a reform facility.

The gang rape and murder of the 23-year-old woman on 16 December 2012 in Munirka, a neighbourhood in South Delhi, triggered nation-wide outrage against the authorities over the safety and security of women in the country.