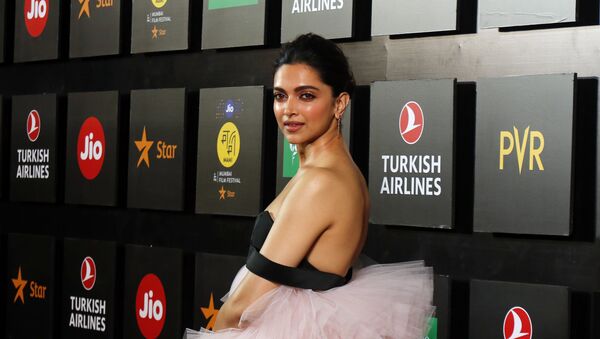 © AP Photo / Rajanish Kakade
Subscribe
New Delhi (Sputnik): Several organisations, the intelligentsia, and celebrities in India have rallied behind the students of a premier university in the national capital, who were brutally attacked by unidentified goons on 5 January.

On Tuesday evening, top Bollywood actress Deepika Padukone, who was in New Delhi to promote her upcoming movie, decided to join protesters at the Jawaharlal Nehru University (JNU) campus, which was attacked over the weekend by masked people.

Soon, pictures of an emotionally overwhelmed and teary-eyed Deepika began making the rounds on social media.

Women are definitely the heroes of this movement. #CAA_NRC_Protests #DeepikaPadukone #Deepika pic.twitter.com/UGN7TQPGyz

In videos and images, Deepika was seen standing tall behind JNU’s Students’ Union President Aishe Ghosh, who was physically assaulted on campus by masked goons on Sunday.

The Bollywood diva attended a public meeting hosted by JNU Teacher's Association and Students' Union and left the campus without addressing the crowds or cameras.

At lightning speed, Deepika’s clear stance on the situation divided netizens. While some called the actress an opportunist for trying to gain publicity for her movie by attending the protest, several others applauded he courage for taking the risk of being seen as “going against the government”.

#DeepikaPadukone and #IStandWithDeepika are trending hashtags on Twitter in India on Wednesday.

This is why it's a BIG deal
Cause publications that would never cover JNU are now forced to @BazaarIndia #DeepikaPadukone pic.twitter.com/F25RwU91Q4

SHE took a stand. SHE stood by the youth seeking justice. It is the only thing that matters. 🇮🇳 #DeepikaPadukone

However, angry netizens urged people to boycott Deepika’s upcoming movie “Chhapaak” based on the real life story of an acid attack survivor because she expressed solidarity with the JNU students.

#BoycottChhapak and #ShameOnBollywood were also trending hashtags on Twitter on Wednesday.

Boycott Chapaak, she never paid a homage or tribute on a martyrdom of a soldier and here she is doing hypocrisy pic.twitter.com/nsE2d8udni

RT if you will Boycott Movies of @deepikapadukone for her Support to #TukdeTukdeGang and Afzal Gang pic.twitter.com/LN5rpwjDmT

​On Sunday, a swarm of masked youngsters attacked hostel-residents inside the JNU campus with sticks, rods, stones, and even acid. More than 30 students, teachers, and other employees were injured and university property was also damaged.

Students at JNU have been protesting against a fee hike since  late last year. After the resumption of classes following winter break, the situation again became tense on the campus, as a section of students opposed a new semester registration process, which was reported to have been the triggering point for the latest round of violence.