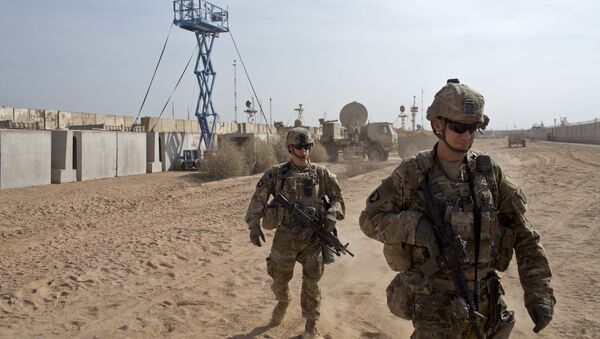 © AP Photo / Marko Drobnjakovic
Subscribe
Elizabeth Blade
All materials
Iran has promised to avenge the death of Qasem Soleimani, the top commander of the Quds Force and one of Iran's most prominent military leaders, who was killed in a US strike on 3 January in Iraq.

Iran has attacked two American bases stationed in Iraq in response to Soleimani's assassination, with no casualties confirmed so far.

US President Trump was quick to dismiss the importance of the Iranian retaliation.

"All is well... we have the most powerful and well equipped military anywhere in the world, by far!..." he twitted adding Washington was still assessing the damage.

However, Dr Yossi Mansharoff, Iran and Shiite militia expert at the Jerusalem Institute for Strategy and Security (JISS) and the Ezri Center of Haifa University, said Iran's attack hasn't taken anyone by surprise.

"Iran is not powerful enough to handle the US Army and that's why it launches its missiles towards the American bases. But that was a small and a predictable attack that didn't cause any casualties and as such US President Trump might not even want to respond to that, especially given the fact that Washington is now heading towards elections".

Yoni Ben-Menachem, a senior Middle East analyst, agreed that the Islamic Republic is not interested in a full-scale war with the US. Rather, Tehran wants to exhaust the Americans, eventually leading to their withdrawal from Iraq, where Washington has stationed some 5,000 military personnel.

"Iran plans to create a unity of all its Shiite militias based in the Middle East whose goal will be to harm American targets in the region. [This] means we can witness ambushes on US military vehicles, assaults on their embassies and bases and even suicide attacks - all in the name of avenging the death of Soleimani".

When American military personnel come back in coffins, the expert believes, Trump will have no choice but to pull out from Iraq.

However, this will not happen that quickly, primarily because such a move could be interpreted by the Iranians as weakness.

Trump has already stated that he has no intention to withdraw his forces and has warned Iraq, which houses US military personnel, that it would face harsh sanctions if it follows the dictates of the Islamic Republic.

"In the future, however, this policy might change and Trump might want to spread out his forces differently in the region to minimise potential assaults", said Ben-Menachem.

But once out, the Israeli expert believes, the void will soon be filled by Iranian militias that will not only threaten the security of the Gulf States, but will also use the soil of Iraq to transfer their weapons to their proxies in Syria and Hezbollah in Lebanon.

Israel considers Hezbollah a threat to the Jewish state's security as the Shiite militia boasts some 50,000 militants and about 150,000 rockets - many of which are long range, meaning they could reach any target in Israel.

Meanwhile, Iran's Islamic Revolutionary Guard Corps (IRGC) has allegedly warned, as cited by the country's Tasnim News Agency, that in the event of an American retaliation to the Iranian strike, Tehran will involve Hezbollah, which will target Israel.

"The radical Islam of Iran wants to strangle and eliminate us because they understand that we are the strongest force [in the region]. The challenges that we are facing are big but we stand still and strong and whoever will attempt to attack us will be dealt a severe and a painful blow", he warned.

000000
Popular comments
"Iran is not powerful enough to handle the US Army and that's why it launches its missiles towards the American bases." .................... LoL, does he understand himself what he is trying to communicate, this "expert"?