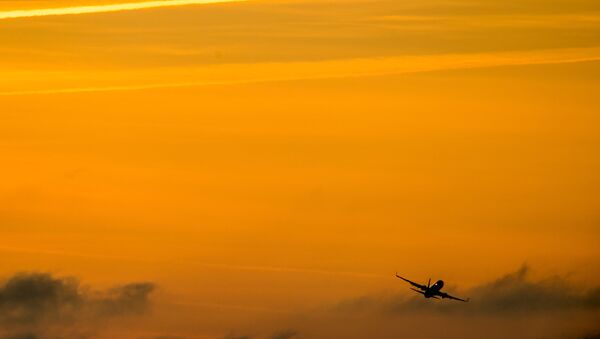 There have been no further details so far concerning possible casualties in the accident. An investigation team is reportedly at the scene.

A Ukrainian Boeing 737 with 176 passengers and crew on board has crashed after taking off from Iran's Imam Khomeini International Airport in Tehran due to technical issues, Tasnim news agency reported on Wednesday morning.

The airport has confirmed the crash to Sputnik.

Tasnim also reported that the airport chief confirmed the information.

"The plane is on fire but we have sent crews ... and we may be able to save some passengers", Reuters reported citing Pirhossein Koulivand, head of Iran's emergency services.

The plane was heading for Kiev, Ukraine's capital, Fars news agency reported. The airport in Kiev said it was not ready yet to comment on the accident.

“The NTSB is monitoring developments surrounding the crash of Ukraine International flight 752 and is following its standard procedures for international aviation accident investigations, including long-standing restrictions under the country embargoes,” Christopher T. O’Neil, chief of media relations at the NTSB, told Sputnik in an email. “As part of its usual procedures, the NTSB is working with the State Department and other agencies to determine the best course of action.”

"The plane’s pilots had no contact with the air traffic control tower," Ali Abedzadeh, the head of Iran’s Civil Aviation Organization, was quoted as saying by the Mehr news agency.

Reza Jafarzadeh, a spokesman for the Iranian civil aviation, told the national broadcast IRIB that radio connection with the jet was lost right immediately after it left the runway.

"On behalf of the government of Canada, Sophie and I offer our deepest condolences to those who have lost family, friends, and loved ones in this tragedy," Trudeau said in a statement. "Our government will continue to work closely with its international partners to ensure that this crash is thoroughly investigated, and that Canadians’ questions are answered. Today, I assure all Canadians that their safety and security is our top priority."

Ukraine International Airline has published the list of all 167 passengers killed in Wednesday’s crash of its Boeing-737 jet in Iran.

The plane with 167 passengers and nine Ukrainian crew came down in the morning, shortly after taking off from Imam Khomeini Airport in Tehran. It was flying to the Ukrainian capital of Kiev.

There are expected to be no survivors. The list published by the Ukrainian airline on its website names all those who were on board alongside their years of birth but makes no mention of their nationalities.

The airline has also reacted to the incident.

"UIA expresses its deepest condolences to the families of the victims of the air crash and will do everything possible to support the relatives of the victims. The airline has created a dedicated telephone numbers for relatives of passengers of Tehran-Kyiv flight PS752 on January 08, 2020 with a request to call as soon as possible by phone," the airline said.

The foreign ministers of Ukraine and Iran, Vadym Prystaiko and Javad Zarif, agreed to coordinate further actions of the investigative groups to determine the cause of the air crash near Tehran.

"Spoke to Foreign Minister of #Iran Javad Zarif @JZarif. Both expressed our condolences. Agreed to coordinate further actions of our investigation groups closely to determine the cause of the terrible plane crash #PS752 in #Tehran," Prystaiko wrote on Twitter.

STOCKHOLM(Sputnik) - Swedish Foreign Minister Ann Linde confirmed the deaths of Swedish citizens in the Wednesday crash of a Ukrainian passenger aircraft near Tehran.

"With great sadness, I received today's news about the plane crash in Iran. Citizens of Sweden were on board and were killed. My deepest condolences to their relatives. This is a tragedy for everyone who was affected by the incident, their families and friends. The crisis centre of the Foreign Ministry began its work," Linde said on Twitter.

Sweden Foreign Ministry spokesman Buster Mirow Emitslof told Sputnik that the country's diplomats were working on the crash site to clarify the number of the Swedish citizens killed in the accident.

"We are now working intensively to obtain clarity about the number of Swedes who have died. We are doing this onsite in Iran, through our Embassy, and at the MFA in Stockholm. The MFA has decided to activate its crisis management organisation until further notice," he said.

The Boeing Company said due to the air crash in southern Tehran, it is in contact with its airline customer Ukraine International Airlines (UIA) and is ready to provide the necessary assistance.

"This is a tragic event and our heartfelt thoughts are with the crew, passengers, and their families," it said on Twitter.

"We are in contact with our airline customer and stand by them in this difficult time.  We are ready to assist in any way needed," the company said.

Germany's Federal Foreign Office is in close contact with Tehran in efforts to determine whether there were German citizens aboard the Boeing 737 plane that crashed earlier on Wednesday in Iran, a spokesperson from the office told Sputnik.

"The [German] Federal Foreign Office and our Embassy in Tehran are in close contact with the relevant authorities to determine whether there were German citizens aboard the aircraft," the spokesperson said.

"I have instructed the Attorney General to open criminal proceedings in regard to the UIA plane crash in Tehran. An investigation commission should be created from representatives of law enforcement and specialized departments responsible for civil aviation. All possible versions [for the crash] should be probed," Zelensky posted to his Telegram blog.

Ukraine International Airlines (UIA) announced on Wednesday that it was suspending indefinitely all international flights to Tehran following the crash of its Boeing 737 aircraft near there earlier in the day, the company's press service said.

"The airline expresses its deepest condolences to the families of the victims of the air crash and will do everything possible to support the relatives of the victims. With immediate effect, UIA has decided to suspend its flights to Tehran until further notice," the company said in a statement posted on Facebook.

Ukraine's Foreign Ministry said on Wednesday that there were 82 Iranians, 63 Canadians and 11 Ukrainian among other foreign nationals on board the plane that crashed earlier in the day in Iran.

Ukraine International Airlines' (UIA) Boeing 737 plane crashed on Wednesday morning near Tehran's Imam Khomeini International Airport killing all passengers and crew on board. Ukraine's National Security and Defense Council has said that a total of 168 people had registered for the flight and there were nine crew members on board. According to the Iran Red Crescent Society, 179 people died in the crash, including 32 foreigners.

Additionally, the ministry said there were 10 Swedes, four Afghan citizens and three citizens from Germany and the United Kingdom each onboard the plane as well.

The Ukrainian president has added that special planes for transporting dead bodies of the crash victims are ready to fly to Tehran; Kiev is waiting for a confirmation from the Iranian side.

"The Ukrainian aircraft took off from Tehran airport this morning, bound for Kiev, but engine catching fire due to a technical problem led it to crash not far from the airport, south of Tehran," a representative of Tehran international airport told IRNA news agency.

"According to preliminary information of a UIA representative, on January 8, 2020, a UIA passenger aircraft suffered an accident and crashed not far from the airport, after take-off from Imam Khomeini International Airport (Tehran). According to the information that is being verified, the passengers of the above-mentioned flight and the crew members died," the Ukrainian Foreign Ministry wrote on Facebook.

"When we received the news about the Ukrainian plane’s crash, the emergency teams went to the crash location to find out the incident details and rescue survivors," Iran’s Aviation Corporation spokesman Jaafar Zada said.

The Ukrainian Embassy in Iran is working on the lists of people killed in Boeing 737 crash near Tehran airport, a representative of the embassy told Sputnik on Wednesday.

"There are no final lists yet, we are working in contact with relevant structures and establishing the lists of those killed," the representative said, adding that embassy staffers were already working in the airport.

Boeing International told Sputnik on Wednesday it knew of a crash of its 737 aircraft in Iran and was collecting more information.

"We are aware of the media reports out of Iran and we are gathering more information," Press Secretary Peter P. Pedraza said.

Flightradar 24 tracking service said it was "following reports' of the Boeing 737 crash shortly after the take-off. The service said they saw the aircraft taking off but then it stopped sending data.

We are following reports that a Ukrainian 737-800 has crashed shortly after takeoff from Tehran. #PS752 departed Tehran at 02:42UTC. Last ADS-B data received at 02:44UTC. https://t.co/qXWHUPGDTu pic.twitter.com/vuAi6TOqTp