‘Who is That?’: Netizens Angry at Madame Tussauds Museum for its Wax Version of Nicki Minaj 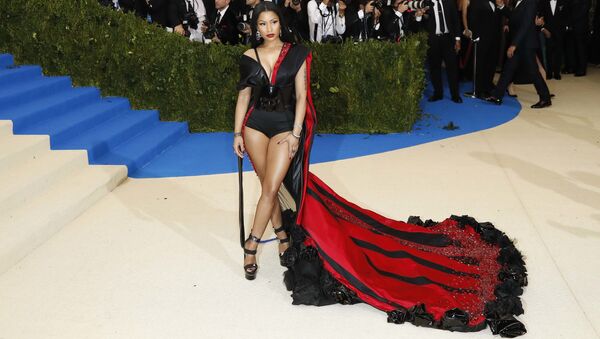 This is not the first time the museum has found itself in hot water over its work. Fans were livid after Madame Tussauds unveiled the statue of singer Beyonce, which social media users and fans found to be whitewashed.

Netizens are baffled and angry after Madame Tussauds in Berlin unveiled a wax statue of singer Nicki Minaj on 7 January. The rapper is portrayed in the outfit she wore for her 2014 video “Anaconda” – a black thong and golden chain bra – and standing on her knees in a jungle-like setting. But it’s not the revealing outfit or the provocative pose that stunned social media users and fans, although they did question why the singer, who frequently wears skimpy outfits is sexualised it’s the fact that the statue doesn’t look anything like the singer.

Madame Tussauds Berlin has unveiled its wax figure of @NickiMinaj based on her “Anaconda” music video. pic.twitter.com/YLbsPCg7TL

​Social media users said that they recognised Minaj only thanks to her Anaconda outfit, but her face was that of some other woman.

She need to come out her hiatus just to cuss them out bc.... who is that?

​Others said that the statue looks like a member of the Kardashian family or the child of singer Awkwafina and former US Secretary of State Colin Powell.

Which kardashian is this

​Some even thought the statue resembled presidential candidate Joe Biden

​Many users said they found Tussaud’s creation disgusting and noted that the museum does bad work when it comes to black people.

Can she sue for false representation because... pic.twitter.com/wMzHvLi1Pa

They consistently fumble the imagery of some of the most iconic black figures. We not taking "coincidences" into 2020.

​Some suggested that the museum should close because it is “butchering” celebrities.

Y’all just need to give it up at this point! You’ve butchered wayy too many celebrities.

Can they just quit making wax figures? They keep getting worse

​Others said that as bad as it looks there have been worse portrayal of celebrities, like the statue of football megastar Ronaldo that was unveiled at Madeira Airport in Portugal.

​One user noted that bad portrayals of celebrities by Tussauds is smart market strategy as the museum then receives greater attention and apparently visitors.

They always seem to release a poor version to gain clout before releasing the real version under the guide of a “redesign” due to outcry. Perfect marketing strategy for Madame Tussaud’s

​Madame Tussauds Berlin and representative for Nicki Minaj have not yet commented on the situation.

In recent years, the museum has come under fire for its inaccurate portrayal of celebrities. Tussauds was heavily criticised for a whitewashed version of singer Beyonce, which it quickly replaced with a new one that has been praised by the artist’s fans. In 2019, the museum unveiled the statue of singer Arian Grande, which fans said looked nothing like the 26-year-old star.