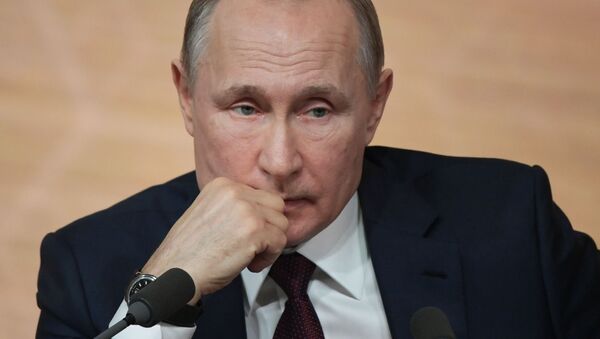 "We accomplished a lot last year. Military police conducted successful operations in the Golan Heights, Palmyra, Aleppo… Russian pilots carried out surveillance flights and lent air support to the Syrian army. This cooperation helped liquidate the most dangerous militant leaders," Putin said in a video of his meeting with Syrian President Bashar Assad, published by the Syrian presidency.

Putin also said that numerous problems remained in the north, east and northwest of the Arab country despite the fact that peaceful life had partially returned.

"There are still a lot of problems in the north of the country, in the east and in the northwest," Putin said at the meeting, adding that he was happy to see peaceful life return to Damascus.

"A lot is yet to be done to restore the Syrian economy. I am very glad that there was an opportunity for us to meet," he told Assad.

On Tuesday, the Russian president flew to Damascus to visit Russian troops stationed in Syria and meet with the country’s leader Bashar al-Assad. Putin's visit to Syria comes amid heightened tensions in the Middle East as Iran and the US have been exchanging threats following the US killing of Iran's top military commander Qasem Soleimani in Baghdad last week.

In 2017, Russian President ordered the withdrawal of Russian troops from Syria after more than two years of successful struggle against terrorist organizations; however, a small number of Russian military units remain at bases in Hmeymim and Tartus in support of the Syrian army’s efforts to combat terrorists. The Hmeymim airbase currently hosts about 30 warplanes and helicopters.