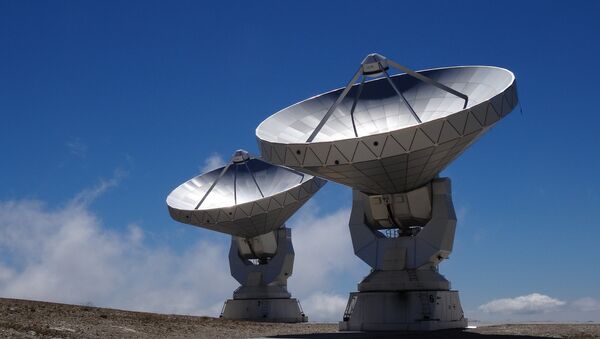 CC0 / /
Subscribe
Even though the astronomers apparently failed to detect any bursts emitted by the signal, one researcher warned that if you can’t see something with a telescope, that doesn’t mean that there’s nothing to see.

The enigmatic signals emanating from outer space, known as fast radio bursts (FRB), have apparently presented scientists with yet another mystery as one of these signals seems to be eluding the watchful eyes of the people who are trying to study it.

According to New Scientist, a team from the Netherlands Institute for Radio Astronomy (ASTRON) led by Leon Oostrum employed the Westerbork Synthesis Radio Telescope to observe two signals, FRB 121102 (R1) and FRB 180814 (R2), for 130 and 300 hours respectively in an attempt to learn more about them and possibly even discover the second signal’s host galaxy.

But while they managed to detect some 30 bursts from R1, the team did not see a single one coming from R2.

One of Oostrum’s colleagues from ASTRON who weren’t involved in this project, Jason Hessels, pointed out, however, that the researcher’s failure to observe the signal doesn’t necessarily mean that the latter ceased to exist, as it’s possible that the telescope they used simply cannot detect the signal’s wavelengths or that the bursts during the time of observation were too dim to see.

"Just because you don’t see anything at this time with this telescope doesn’t mean there’s nothing to see", he remarked.

The media outlet also noted that the Westerbork Synthesis Radio Telescope apparently uses wavelengths different from those in which the telescope that was used to discover R2 observes in.

Commenting on this development, Oostrum himself said that these results show that the two signals in question seem quite different from one another.

"If the two were similar, we should have seen that second repeater easily, and we didn’t", he explained. "They could be very different in how bright they are, how often they repeat, and basically any other parameters as well".