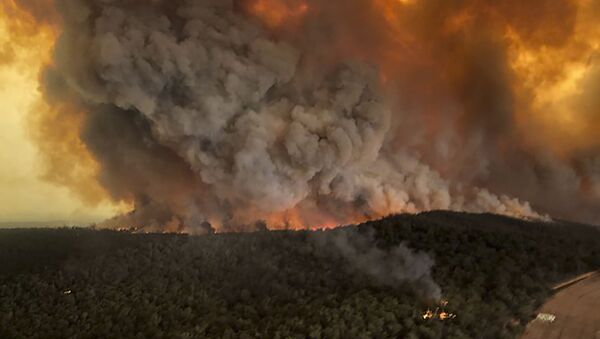 The Insta-model, who said she has already raised hundreds of thousands of dollars for Australian bushfire relief by offering nude photos in exchange for donations, says Instagram shut down her account.

Los Angeles-based influencer Kaylen Ward, 20, said she was recently inspired to take action to raise awareness and help with fundraising for Australian bushfires.

"I was seeing all the posts on Twitter about the Australian fires and I was really concerned there wasn't a lot of media coverage and not a lot of people donating," she told BuzzFeed News.

Ward was already selling her naked photos online, however, on January 3 she tweeted that anyone who sent proof that they'd donated at least $10 to a list of Australian charities would get a nude photo in their DMs. She also renamed her account “the naked philanthropist,” adding that she isn’t taking any money herself – only confirmations of donations.

The tweet gathered almost 80 million retweets, with Ward saying she was expecting to raise $1,000 but the tweet blew up. By Sunday the campaign had raised over $500,000, benefiting organizations including the NSW Rural Fire Service, Victorian Country Fire Service, the Australian Red Cross, Rotary Australia and the Salvation Army.

Netizens were overwhelmingly positive, according to Ward, with several Twitter users saying that “not all heroes wear clothes”. However, not everyone was fond of her initiative as Word said Instagram had blocked her account with 50,000 followers.

In a screenshot posted by Ward, Instagram said she had posted "sexually suggestive content," though the model denies she broke any rules. She's tried to reach out to Instagram but hasn't heard back, and, for her disapproval, she found that others tried to steal her popularity with fake accounts.

Moving forward, the model remains focused on raising money for the Australian wildfires, even revealing that she has hired help to answer the thousands of messages her nude photo pitch has received.

"This sounds ridiculous but I’ve got people I’ve hired to help sort through the DMs. I’m also actually sending the pics I promised, one for each $10,” she said, per the Sun. “Someone sent me $5,000, so I'm sending 50 pics and videos.”

My IG got deactivated, my family disowned me, and the guy I like won’t talk to me all because of that tweet. But fuck it, save the koalas.

Last week, ecologists at the University of Sydney estimated that nearly half a billion animals, including reptiles, mammals and birds, have been wiped out by Australian bushfires since September 2019. In addition, the fires and associated smoke and dust have resulted in extremely high air pollution in the country. In December, the particulate level in Sydney’s air was around 50 micrograms per cubic meter of air, which is much higher than the 12 micrograms per cubic meter of air threshold that’s been determined as safe by the US Environmental Protection Agency.