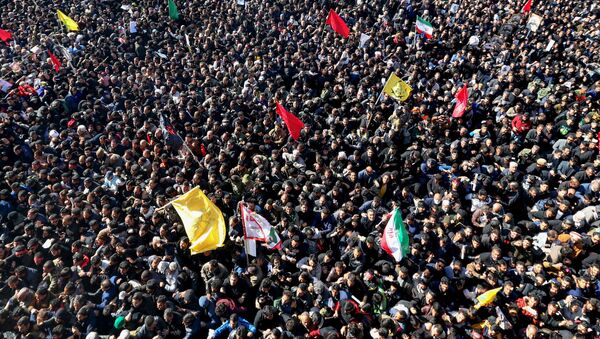 Earlier in the day, the US issued a warning to ships sailing through the waterways in the Middle East, saying there is "a possibility of Iranian action against US maritime interests in the region."

The US is preparing for a possible Iranian response after its top military commander Qasem Soleimani was killed in a US drone strike at Baghdad International Airport on 3 January.

On Monday, CNN reported, citing an official, that the Pentagon had deployed six B-52 strategic bombers to Diego Carcia, an island base in the Indian Ocean, for potential use against Iran if ordered to do so.

Soon after the attack on Soleimani, Tehran vowed a response to what it called an act of "state terrorism" by the US. US President Donald Trump answered by saying that his country wants no threats and said that the US would 'hit fast and hard' in case Iran retaliates.

Table of contents
Pentagon Chief Says US Not Looking to Start War With Iran
French President Talks to Iranian Counterpart Rouhani About Mideast Tensions
Iraqi PM Says English and Arabic Language Versions of US Letter Not Identical - Report
O'Brien Says Unsure US Intelligence on Soleimani Killing Will Be Declassified
'Anybody Here Believe That?' Pompeo on Reports That Soleimani Was in Iraq on Diplomatic Mission
France Has No Plans to Reduce Troop Numbers in Iraq - Report
Germany Says Europe Needs to React to Iran's Violations of Nuclear Deal
US Reportedly Intends to Build Airfield for Strategic Bombers in Iraq
Soleimani Funeral Stampede Death Toll Rises to 50 - Report
Germany Says Iran Is Responsible for De-escalating Tensions With US
Zarif Comments on His US Visa Denial Ahead of UN Security Council Meeting
Death Toll From Soleimani Funeral Stampede Up to 40 – Medics
UK Keeps Protection of Its Armed Forces Under Constant Review - PM Johnson's Spokesman
'War With Iran Would Strengthen Militants' - British Foreign Secretary Dominic Raab
Zarif Says Iran Will Respond 'Proportionately' to US Killing of Soleimani
Number of Injured During Soleimani's Funeral Procession in Iran Reaches 190 - Medics
At Least 32 People Killed in Stampede During Soleimani's Funeral
New firstOld first
18:26 GMT 07.01.2020

Macron Urges Rouhani to Avoid Any Steps That Could Deteriorate Situation in MidEast - Office
17:21 GMT 07.01.2020

Iraq has received a letter from the US army concerning the withdrawal of US troops from the country. Prime Minister Adel Abdul Mahdi said on Tuesday, according to Reuters.

He added that the English and Arabic language versions of the letter are not identical, so Iraq requested clarifications.

On Monday, the Iraqi parliament passed a resolution requesting the withdrawal of all foreign troops from the country after its top military commander Qasem Soleimani was killed in a US drone strike in Baghdad on 3 January.

US National Security Adviser Robert O'Brien told reporters on Tuesday that he is unsure the Trump administration will declassify intelligence backing its decision to kill top Iranian commander Qasem Soleimani.

"I don't know if we're going to be able to do that or not because we don't want to put our sources and methods at risk, but we're taking a look at that, I can tell you that the evidence was strong," O'Brien said.

The national security adviser emphasised that the evidence is strong revealing Soleimani was plotting to attack US facilities hosting diplomats and troops.

O'Brien also said the US government is monitoring threats of retaliation from Iran closely.

France does not have plans to reduce the number of its troops in Iraq at the moment, Reuters reported, citing a French government source.

However, security around the French troops in Iraq will be tightened, the source added, as quoted by the agency.

As part of the international coalition to fight Daesh*, France has been providing training and logistical support to Iraqi and Kurdish forces.

Europe needs to react to Iran's violations of the Joint Comprehensive Plan of Action (JCPOA) and this must be discussed with France and Britain, Germany's Foreign Minister Heiko Maas said, as quoted by Reuters.

German Defence Minister Annegret Kramp-Karrenbauer said on Tuesday that Iran should avoid escalation in the Middle East after the US killing of Qasem Soleimani.

"I say clearly that Iran has been responsible for the escalation in the region and therefore it is Iran's responsibility to contribute to de-escalation," she said at a gathering of German conservatives in Bavaria, as quoted by Reuters.

The death toll from a stampede that happened Tuesday during the funeral of slain Iranian general Qasem Soleimani has risen to 40, media cited the head of the emergency services as saying.

"As of now, 40 our compatriots have died in this accident and 213 were injured," Pirhossein Kolivand was quoted as saying by the Fars news agency.

Huge crowds of mourners packed the streets of Kerman, the hometown of the fallen Quds Force commander, to pay their respects. This caused a stampede that initially claimed over 30 lives.

Great Britain keeps the protection of its armed forces under constant review, a spokesman for Prime Minister Boris Johnson said on Tuesday, in response to a question as to whether the government would withdraw troops from Iraq over tensions in the Middle East.

Prime Minister Johnson has held a meeting with leading cabinet ministers to discuss the situation in the Middle East caused by the US killing of Iran's military commander Qasem Soleimani.

According to Johnson's spokesman, the cabinet agreed that Soleimani was responsible for a pattern of destabilising behaviour in the region and was a threat to Britain's interests.

"What we're looking to do is to de-escalate the tensions with Iran and make sure in relation to Iraq that we don't lose the hard-won gains that we secured against Daesh...We are concerned that if we see a full-blown war it would be very damaging and actually the terrorists, in particular, Daesh*, would be the only winners," Raab said as quoted by Reuters.

The killing of a top Iranian general by the United States was an act of state terrorism and Iran will respond proportionately, Iranian Foreign Minister Mohammad Javad Zarif told CNN on Tuesday.

The number of people injured in the stampede in the Iranian city of Kerman during the funeral procession of late Qasem Soleimani, the country's Revolutionary Guards’ elite Quds Force commander, killed by the United States last week, has grown to 190, with 32 people dead, the Islamic Republic of Iran Broadcasting (IRIB) reported on Tuesday, citing the head of the emergency services.

"Due to stampede, 32 people have died, 190 got injured. The injured have been sent to hospitals and medical centres, they are receiving medical treatment," Pir-Hossein Kolivand, the head of Iran's Emergency Medical Services Organization, said, as quoted by the IRIB.