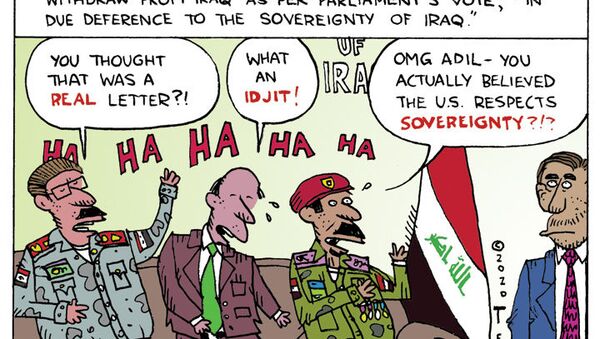 US Secretary of Defense Mark Esper and US Army Gen. Mark A. Milley, chairman of the Joint Chiefs of Staff, were forced to go on the defensive Monday when the commander of US forces in Iraq, US Marine Corps Brig. Gen. William H. Seely III, mistakenly sent a letter announcing the US’ withdrawal from Iraq.

The letter, sent to Iraqi Lt. Gen. Abdul Amir Yarallah, was later revealed to be an error - but not before news outlets around the planet reported on the departure of US forces, which have been in Iraq since the March 2003 invasion.

Washington is now in the midst of a “kerfuffle,” according to the US’ top general, following the delivery of an unsigned draft letter to Baghdad implying that Washington would be directing the removal of thousands of its troops from Iraq.

“It [the draft letter] was sent over to some key Iraqi military guys in order to get things coordinated for air movements, etc,” Milley said, as reported by Reuters on Monday. “Then it went from that guy’s hands to another guy’s hands and then it went to your hands. Now it’s a kerfuffle.”

This “kerfuffle” came about just one day after the Iraqi Parliament reached a non-binding resolution calling for the removal of US troops from Iraq, which followed a number of US airstrikes performed without Baghdad’s permission, including one that killed Iranian Quds Force commander Gen. Qasem Soleimani.