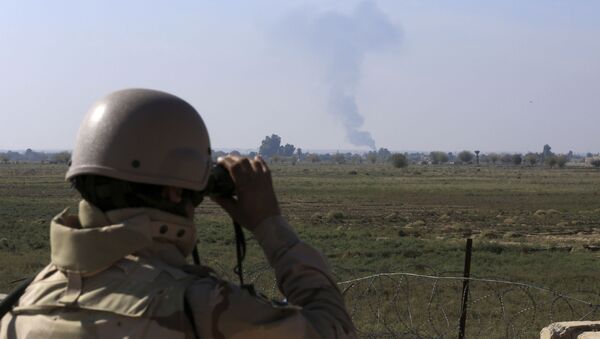 Iraq's parliament on Sunday voted in favour of removing US troops after a powerful Iranian military commander was killed in a US airstrike in Baghdad. President Trump has threatened Iraq with sanctions should the plan go forward.

The Iraqi authorities have begun the preapartions for removing US troops from the country, Abdul-Karim Khalaf, a security spokesman for Iraq's prime minister, told reporters on Monday.

He said that the US-led international coalition will be allowed to consult, arm and train Iraqi military personnel and security forces, but the troops will be removed.

Khalaf added that the Iraqi government had limited the movements of foreign forces on the ground and in the air.

The process kick-started a day after Iraqi lawmakers adopted a motion requiring the government to end the presence of foreign troops from the country. There has been no word from the government on whether it ratified the resolution.

The US and allied Western countries intervened in Iraq at the request of the local government in 2014, following the rise of Daesh jihadists, just three years after ending the occupation that began in 2003. On the ground, that coalition is mostly represented by American troops, with approximately 5,200 US soldiers fighting the remnants of Daesh* in Iraq and in the neigbouring Syria.

Sunday’s resolution was passed under the formal pretext that the terrorists had been defeated, although the underlying reason appears to be the outrage with the recent US airstrike that killed powerful Iranian commander Qassem Soleimani on Friday in the Iraqi capital, Baghdad.

Abdul-Karim Khalaf called that strike, which hadn't been agreed with Iraq in advance, a “stupidity [that] is impossible to keep silent about.”

The Iraqi foreign ministry on Sunday summoned the US ambassador to condemn the strike as a “blatant violation of Iraqi sovereignty.”

It comes at a time of increased confrontation between the United States and Iran, so one would expect Washington to be interested in keeping its troops near Iran’s borders as a deterrent. President Donald Trump has already threatened Iraq with harsh sanctions should the US troops be removed.

“We have a very extraordinarily expensive air base that’s there,” he told reporters. “It cost billions of dollars to build. We're not leaving unless they pay us back for it.”

*Daesh is a terror group outlawed in Russia, the United States and many other countries.