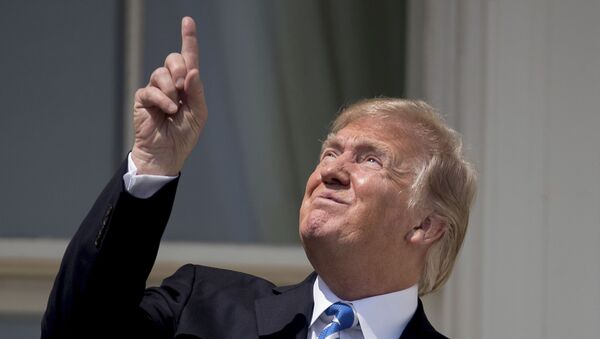 © Andrew Harnik
Subscribe
On Sunday, Iran announced that it would be rolling back its commitments under the 2015 nuclear deal amid escalating tensions with Washington over the killing of a senior Iranian military commander.

President Donald Trump has taken to Twitter to write an all-caps declaration stating that Iran would never be allowed to gain access to a nuclear weapon.

IRAN WILL NEVER HAVE A NUCLEAR WEAPON!

Trump did not immediately expand on what he meant by the statement.

The president made the comments after Tehran's announcement Sunday that it would continue to reduce its obligations under the Joint Comprehensive Plan of Action nuclear deal, and proceed to enrich uranium based on the technical requirements of its nuclear industry. Iran also emphasised that it would continue to cooperate with the International Atomic Energy Agency, and voiced its readiness to return to its obligations under the JCPOA if sanctions against the country were lifted.

Iran's move prompted the JCPOA's European signatories Germany, France and the UK to call on Tehran to refrain from actions "that do not comply with the nuclear deal." Following the US's unilateral withdrawal from the JCPOA in May 2018, the deal's European signatories tried to hammer out a way to shield Iran from the tough US energy and banking sanctions, including via the creation of a special trade and payment mechanism. These efforts proved insufficient, however, and in May 2019, Iran announced that it would begin to gradually reduce its commitments under the nuclear deal until its interests were accounted for.

Moscow, another signatory of the JCPOA, said Monday that it is not concerned by Iran's rollback on limitations set by the JCPOA. In a statement, the Russian Foreign Ministry indicated that Iran's decision does not present any threat of nuclear weapons proliferation, because the country has maintained contact with the IAEA.

Iran began enriching its uranium stockpiles to the level of 5 percent, above the 3.67 percent limit outlined in the JCPOA, by November. However, this amount is well below the levels required to produce a nuclear bomb. Scientists classify uranium as 'weapons grade' once its U-235 concentration reaches above 80 percent. For example, the nuclear bomb the US dropped on Hiroshima in 1945 had a U-235 enrichment level of about 80 percent.

Iranian officials have also repeatedly said that they have no intention of pursuing nuclear weapons, or weapons of mass destruction of any kind, since these are said to run counter to the country's Islamic faith. Iran destroyed its stockpile of chemical weapons by 1997 as it ratified the Chemical Weapons Convention, and has repeatedly urged the US to do the same.

Tensions between Iran and the US and Iran have escalated over the past two weeks amid violence in Iraq, beginning with a rocket attack on a US base in Kirkuk and culminating in the US assassination of Iranian Revolutionary Guard Corps Quds Force Commander Maj. Gen. Qasem Soleimani in Baghdad on Friday.

000000
Popular comments
Perhaps Washington DC will let USrael defend itself...... Israel is not worth the loss of a single American.

keyboardcosmetics
6 January 2020, 18:34 GMT8
000000
Stop Trump. All you do is have dumb, terroristic ideas. 1)bomb persons exiting an international airport 2)threaten to blow up cultural sites like the Taliban and ISIS 3)threaten severe sanctions that'll kill civilians.