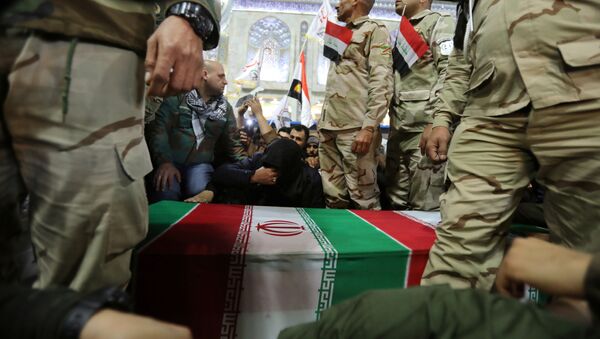 Qassem Soleimani, 62, was killed alongside 11 other people in a targeted US strike just outside Baghdad on Friday. His coffin was reportedly put on passenger seats as the body was transported to Tehran for funeral.

Passengers on a domestic Iranian flight on Monday had the morbid company of five corpses, one apparently belonging to the late Iranian general, Qassem Soleimani.

According to video footage shared on Twitter, Soleimani’s body was transported on a Mahan Air flight between Mashhad, Iran’s second-largest city, and Tehran, the country’s capital.

The clip shows what appears to be five caskets occupying entire rows in the cabin while passengers are casually watching in-flight TV where Soleimani appears in the flesh.

The caskets, one of which is said to transport the body of Iraqi militia commander Abu Mahdi al-Muhandis, are decorated with daffodils and painted in the colours of Iran’s flag. Each of them sports an image of the man whose remains it contains.

#BREAKING: An Airbus A300-603R of #MahanAir transported corpses of Qasem #Soleimani & Abu-Mahdi Al-Muhandis from #Mashhad to #Mehrabad Intl Airport, #Tehran. Their coffins were put on the passenger seats instead of being loaded in cargo/baggage compartments! pic.twitter.com/NnmKBvL8KB

The city of Mashhad in north-east Iran on Sunday hosted a funeral procession for Soleimani, who was killed alongside Mahdi al-Muhandis and 10 others in a US strike at the Baghdad airport on Friday.

Soleimani had for 22 years headed Iran’s Quds Force, an elite unit within the Revolutionary Guards Corps responsible for clandestine operations outside Iran. He was considered to be one of the country’s most powerful military commanders and political figures.

His assassination on Iraqi soil led to another escalation of tensions between Iran and the United States, which exchanged threats of further strikes, and prompted the Iraqi government to move to expel US troops from the country.