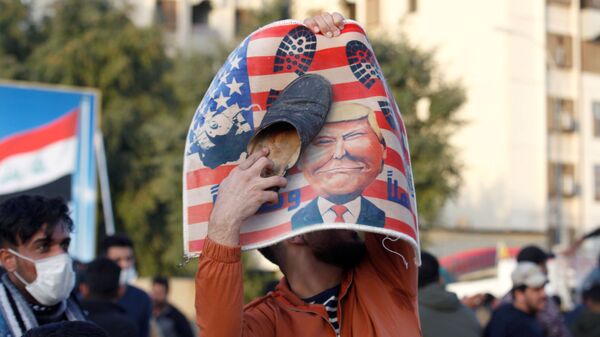 President Trump’s campaign of maximum pressure on Iran has backfired massively, as the Islamic Republic scrapped its commitments to the nuclear deal and vowed to avenge the assassination of its most powerful battlefield commander.

Donald Trump might want to reschedule his planned visits to the Middle East, if he has any, as there is a bounty offered for his head in Iran.

According to Al Arabiya, the prize was announced by an unnamed eulogist at the funeral procession for Gen. Qassem Soleimani, broadcast live on Iran’s Channel One from the Iranian city of Mashhad on Sunday.

He told the crowd that if every Iranian chips in $1, the total sum would equal $80 million.

“And we would give this $80 million, on our own behalf, as a gift to anyone who brings [us] the head of the person who ordered the murder of the grand figure of our revolution,” the eulogist said, referring to Soleimani.

“Anyone who brings us the head of this yellow-haired lunatic, we would give him $80million on behalf of the great Iranian nation. Chant if you agree,” he added, as the crowd cheered on.

OMG! Iran's regime just announced an $80 million bounty for anyone who brings the head of @realDonaldTrump for killing Soleimani.
PS: Iran's ppl however are overjoyed at Soleimani's death. As the #IranProtests have shown, they long for an end to the mullahs' tyranny #FreeIran2020 pic.twitter.com/uB3zOG5EKA

Although the proposal was aired on state television, the government stopped short of floating a similar one – which would be tantamount to a declaration of war.

The prospects for a war between the US and Iran did increase in the past week following a series of US attacks on Iranian-backed militias in Iraq, which culminated in the targeted assassination of Soleimani, the powerful chief of the Quds Force, which handles Iran’s clandestine operations abroad.

Iran vowed to retaliate, with many analysts predicting a series of tit-for-tat strikes rather than a full-blown armed conflict. Donald Trump responded by threatening twice to strike several dozen Iranian sites, including some cultural ones, in possible violation of international law.

The Islamic Republic on Sunday upped the ante by announcing a rollback of its remaining obligations under the 2015 nuclear deal. The country started curbing its commitments in May 2019, precisely a year after Donald Trump withdrew from the pact claiming it wasn’t tough enough on Iran.

The Soleimani gambit has also backfired in Iraq, where the parliament adopted a resolution requiring the government to force the withdrawal of more than 5,000 US troops from the country.

The lawmakers and the government were outraged by the killing of Soleimani on Iraqi soil and the fact that it wasn’t coordinated with Iraq. The US said it was “disappointed” by the decision and urged Iraq to reconsider it.