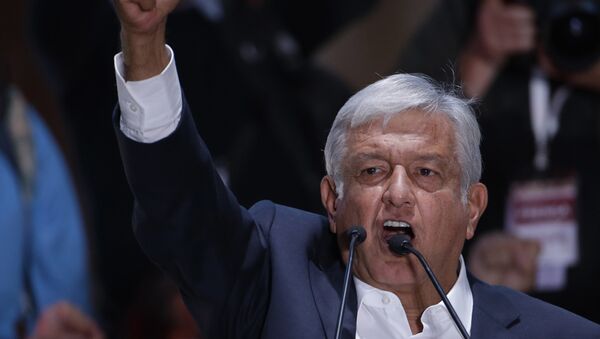 © AP Photo / Moises Castillo
Subscribe
Wikileaks founder Julian Assange is currently being held in a British jail after an almost 7-year period of living in the Ecuadorian embassy as he fights to prevent his extradition to the US on the basis that he leaked confidential US military caches and documents.

Mexican president Andres Manuel Lopez Obrador has issued a statement of solidarity with detained Wikileaks founder Julian Assange, saying that liberating Assange from incarceration is a "just cause".

Obrador told a press conference that documents published by WikiLeaks proved the corrupt workings of the previous Mexican political order and its true "authoritarian" nature.

The president also called for Assange to be "forgiven and released".

"I hope that this is taken into consideration and he is freed and he is no longer tortured" he said during the conference.

"There are cables that came to light from when we were in opposition and they spoke about our struggle and I can corroborate that they are true, that is to say what is in them was accurate, they revealed illegal relationships, illegitimate acts, violations of sovereignty, contrary to democracy, against freedoms, this is what is in there".

Obrador expressed his "solidarity" and his wish to see Assange "pardoned and that it is considered, that he is liberated he could offer an apology".

"Liberating him will be a very just cause for human rights, it will be an act of humility on the part of the authority that has to decide on the liberty of this journalist", he added.

Assange is currently being held in a British jail after a nearly 7-year tenure living in Ecuador's embassy in London after seeking asylum. He is officially incarcerated for skipping bail to avoid extradition to Sweden regarding now-dropped rape allegations.

He is fighting attempts by the US to extradite him over the leaking of secret military documents and videos that point to US war crimes.

Nils Melzer, the UN special rapporteur, said in 2019 that Assange had suffered "psychological torture" during his incarceration and should not face extradition to the United States as he would face an effective "politicised show trial".

The UK, as a signatory to the European convention on human rights, said that it will not extradite Assange if he were to face the death penalty in the US.

Assange's extradition hearing is reportedly geared to begin in February and could last up to 4 weeks.