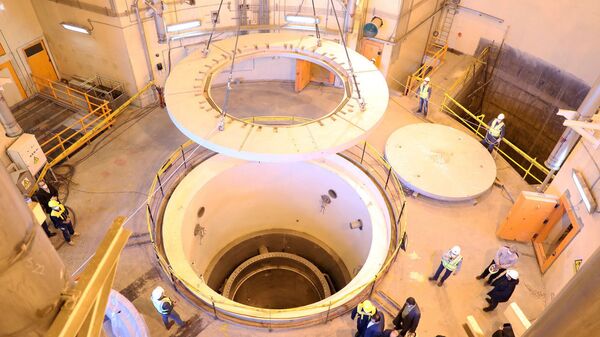 On Sunday, the three leaders held telephone conversations in the wake of escalated tensions in the Middle East due to the assassination of Qasem Soleimani, the commander of the elite Quds Force of Iran's Islamic Revolutionary Guard Corps, in a targeted US airstrike in Baghdad. The assassination has caused outrage in Iran and in much of the world. Tehran stated on Sunday that, as a result of the extrajudicial killing of its top general by the Trump administration, it would discontinue its remaining obligations under the JCPOA, whose fate had been unclear after Trumop unilaterally withdrew the US from the agreement in 2018.

The three leaders also called on Baghdad to ensure continued support for the international US-led anti-terrorism coalition, in the wake of the Iraqi parliament's vote to expel foreign troops from the country taking place following the killing of Qasem Soleimani and Abu Mahdi Muhandis.

"We also reiterate our commitment to fighting the IS [the Daesh terror group, banned in Russia] and still give high priority to it. In this regard, preserving the coalition is of high importance. We call on Iraqi government agencies to continue providing the needed support to the coalition," the statement read.

The E3 leaders added that they would continue working together, with all parties to the Middle East conflict, to "ease tensions in the region and ensure security."

Merkel, Macron and Johnson condemned attacks on forces of the US-led coalition in Iraq, while expressing concerns regarding the negative role played by Iran’s slain Maj. Gen. Qasem Soleimani in the region.

"We condemned the recent strikes on the coalition forces in Iraq and are deeply concerned by the negative role that was played by Iran in the region, especially through the Iranian Revolutionary Guard Corps and Quds Force under the command of General Soleimani," the joint statement, issued by the German cabinet late on Sunday, read.

The three leaders also called for a deescalation of tensions in the region.