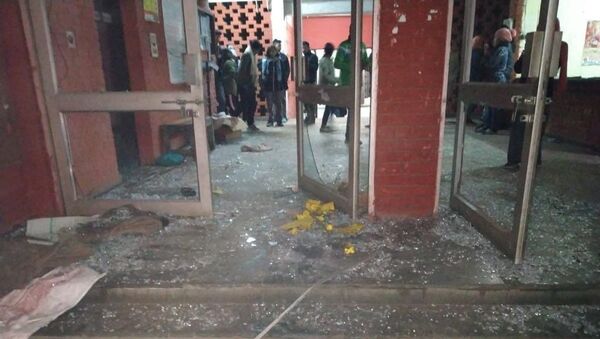 The All India Institute of Medical Sciences has reported that 15 students from JNU were admitted with severe head injuries inflicted by sharp weapons and rods. Two of the students are in a serious condition including students union president Aishe Ghoshe.

New Delhi (Sputnik): Students and teachers at India's Jawaharlal Nehru University (JNU) were attacked by unidentified masked men and women on the university campus in New Delhi on Sunday.

According to Network 18, "fresh violence erupted in Jawaharlal Nehru University on Sunday evening after a mob pelted stones at protesting students. The incident took place during a march in the varsity around 5pm when masked individuals with rods entered Sabarmati hostel."

JNU registrar Pramod Kumar said in a statement, "This is an urgent message for the entire JNU community that there is a law and order situation on the campus. Masked miscreants armed with sticks are roaming around, damaging property and attacking people. The JNU Administration has called the police to maintain order."

JNU students' union claimed that female students locked themselves inside the girls' wing in Sabarmati Hostel. They alleged that attackers were roaming the corridors with rods and sticks.

Delhi CM Arvind Kejriwal expressed shock at the JNU violence. "I am so shocked to know abt the violence at JNU. Students attacked brutally. Police shud immediately stop violence and restore peace. How will the country progress if our students will not be safe inside univ campus?" he tweeted.

A team of doctors from AIIMS has reached the university campus.

​The university administration has allowed Delhi police to enter the campus. Police are conducting a flag march inside the campus. Joint commissioner has said situation is under control.

However, the ABVP has rejected such allegations and is blaming the left for the attack.

Left goons have unleashed their red terror in JNU. Armed with sticks, rods, stones, acid they have visited every room of ABVP activist in the hostel to kill them. When they could not stop students from registering, they targeted and brutally attacked them.#RED_TERROR_IN_JNU pic.twitter.com/kogk3A7iwU