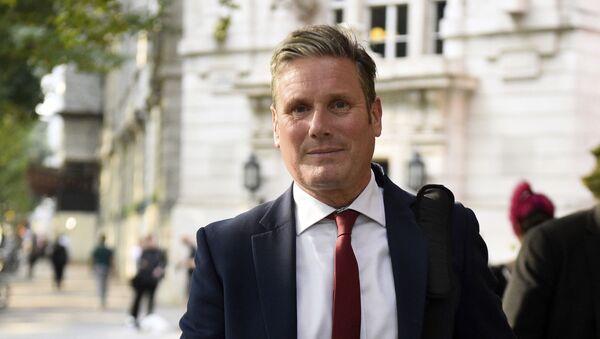 Following Labour's worst election result since 1935, Labour leader Jeremy Corbyn announced that he would not lead the party into the next general election. A race for the future of the party has now ensued with Corbyn opponents, allies, and moderates all announcing their intention to run for the top job.

Two of the top contenders for the Labour leadership position have outlined different visions for how they will pursue Labour's post-Brexit policy.

While talking during the Andrew Marr Show, Keir Starmer said that the argument over whether the UK will leave the European Union is over while backbencher Jess Phillips suggested she may advocate rejoining the bloc.

Sir Keir, who has confirmed his intention to run for the post and is now considered the frontrunner to succeed Jeremy Corbyn according to YouGov polling, said that Labour must now focus on the future.

"We are going to leave the EU in the next few weeks and it is important for all of us, including myself, to recognise that the argument about Leave and Remain goes with it", he said.

"We are leaving. We will have left the EU. This election blew away the argument for a second referendum, rightly or wrongly, and we have to adjust to that situation".

​Jess Phillips, who has been an ardent critic of Corbyn throughout his leadership, told Marr that the party would have to "wait and see" what the consequences of leaving are.

"You would have to look at what was going on at the time. What our job is for the next three years is to hold Boris Johnson to account on all the promises".

"But the reality is is if our country is safer, if it is more economically viable to be in the European Union then I will fight for that regardless of how difficult that argument is to make".

​The stark divergence in perspective emerges just a day after they both announced that they are running for the top job, which has become emblematic of some of the serious factional divides which have plagued the Labour Party in recent years.

According to the YouGov polling, second favourite to become leader is staunch Corbyn-ally Rebecca Long-Bailey.

Corbyn himself has been blamed by Labour's centrist-wing  of being part of the reason why the party lost so badly in the December election.

Allies of Corbyn, citing the party's success in the 2017 election, claim that the position of advocating a second referendum advocated by the likes of Sir Keir and Jess Phillips, was the cause of the poor election result.

The Labour Party is currently home to hundreds of thousands of activists who twice elected Jeremy Corbyn to the top job.

Any leadership hopeful will have to appeal to the party's grassroots, which may serve as a hurdle for Jess Phillips who has been a strong critic of Corbyn's leadership.

In 2015 she claimed that she would figuratively "knife Corbyn in the front" if he damages the party.

Despite resigning from the front bench and backing Owen Smith in his bid for the leadership in 2016, Keir Starmer has followed the party line effectively.

Following the announcement of his own candidacy on Saturday, Sir Keir posted a video highlighting his credentials of providing free legal advice to striking miners, his opposition to the Iraq war, and promoting a foreign policy of peace.

With his new acceptance of the Brexit vote, this may be part of a broader attempt to appease the Corbynite party base.