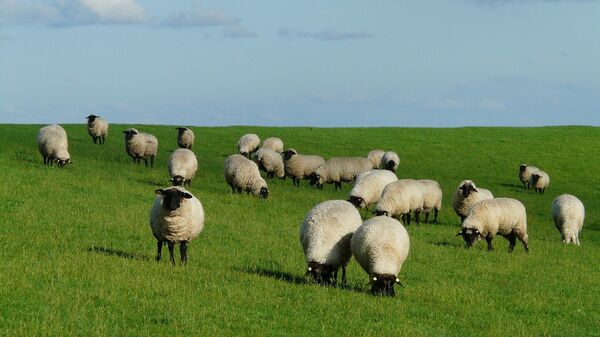 Ilya Tsukanov
All materialsWrite to the author
Authorities suspect that the robberies were carried out by a professional crew of thieves equipped with specially trained dogs.

Police in Wiltshire, southern England are on the lookout for what they believe is a gang of professional sheep thieves following a spate of incidents led to the disappearance of close to 200 sheep over the past two months.

According to Sky News, between November 7 and December 27, three incidents in the Wiltshire communities of Lacock, Melksham and Derry Hill saw 45, 61 and 72 sheep stolen, respectively. The latest theft involved Romney breeding ewes, a hardy breed of sheep valued for its meat and long wool.

Constable Emily Thomas of Wiltshire Police urged the residents of region to remain vigilant, and to call police if they spot any vehicles or people dealing with livestock whom they did not recognise. “Even if it turns out the individuals are legitimate, we would rather be made aware so we can check all is well,” she said.

Thomas said police think the three incidents are connected. “We are keeping an open mind but we believe these incidents may be linked and those responsible must be skilled sheep handlers with trained dogs as this kind of theft requires a high level of organisation to be conducted quickly and undisturbed.”

Police said they were aware that in addition to the financial loss, this sort of crime could “also have an emotional impact, as in some of these circumstances, it would have taken years of breeding to establish the flock. Not knowing what may have happened to the animals can be extremely upsetting.”

The theft of farm animals is not an altogether uncommon occurrence in the UK. In 2019, Farmers Weekly cited insurance claims figures which estimated that some £2.5 million (about $3.25 million US) in animals were stolen in 2018.

The prices of livestock vary considerably by region and depending on pedigree. Listings on local farming-related classifieds website farmingads.co.uk feature sheep and lambs ranging from £70-£150 a head.