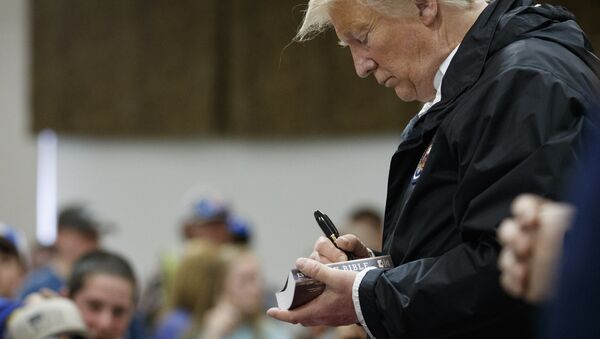 © AP Photo / Carolyn Kaster
Subscribe
Svetlana Ekimenko
All materialsWrite to the author
President Donald Trump rallied evangelical supporters in Miami on Friday, 3 December, recalling the backing he received from the key voter bloc during the 2016 presidential campaign, and predicting he would “blow those numbers away in 2020.”

US President Donald Trump adressed supporters in Miami at a campaign event launching his “Evangelicals for Trump” coalition on Friday evening.

Evangelicals for @realDonaldTrump are out in full force in Miami!#EvangelicalsForTrump pic.twitter.com/g04G9muUUk

​As he lambasted his Democratic opponents as “radical” leftists pursuing an “extreme, anti-religious and socialist” agenda, Trump said:

“Evangelicals, Christians of every denomination and believers of every faith, have never had a greater champion in the White House — not even close — than you have right now.”

As the US President underscored the support he had enjoyed among evangelicals during 2016, he predicted he would “blow those numbers away in 2020.”

“I do really believe we have God on our side… Or there would have been no way we could have won," said Trump of his first presidential campaign.

POTUS urged supporters to “get out and vote” in November, as those assembled started chanting “four more years”.

Here’s Trump posing for a picture while Evangelicals are praying for him 🙄 pic.twitter.com/h7nvmZx69u

​As those gathered at King Jesus Ministry in Florida church appeared to pray to God to protect the president, the event wasn’t exactly well-received by the user running the “God” account on Twitter.

While retweeting the story on the prayers, run by The Hill, the Twitter “God” denied that he was on the side of Trump and his supporters, tweeting:

No. No. Negative. Untrue. False. Incorrect. In no way the case. No. https://t.co/GaQI0JVcbg

Religion is regarded by the common people as true, by the wise as false, and by the rulers as useful.

Donald Trump is Christian in the same way that I am a Koala Bear.

Narrator: He was not a koala bear.

I don't believe in you but I'm glad you set the record straight on this.

My love for your feed makes me question my atheism

This is a parody. Everyone knows that the real God is on FB, not Twitter.

​Donald Trump’s approval rating among evangelicals has remained strong throughout his tenure, despite some of his actions and statements drawing scrutiny among religious groups.

Trump has described the evangelicals coalition as “one of the most important grassroots movements in American history.”

The Evangelicals for Trump coalition gathering is one of several events the president’s 2020 campaign has planned in recent weeks in order to drum up support among the electorate.

000000
Popular comments
Trump is an international fool. He has made the American people nowhere safe in the world. We will take revenge on General Suleimani's blood. He was the champion of Iran and we have many like him. But who is the champion of America? Sponge Bob or Spider-Man?