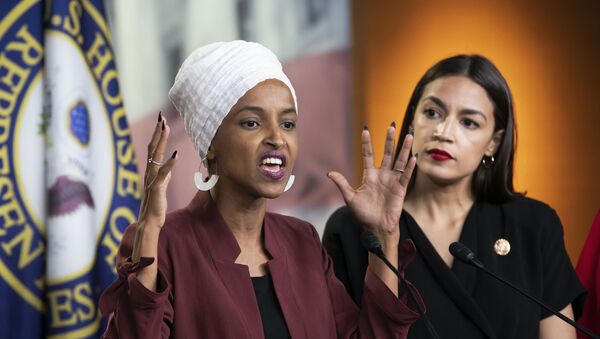 US President Donald Trump tweeted his threat to Iran claiming that the US military will target 52 areas "important to Iran & the Iranian culture". The tweet led to a barrage of accusations that the president is intending to commit war crimes against the Islamic republic.

New York representative Ocasio-Cortez tweeted that Trump is "threatening to target and kill innocent families, women and children" and target "cultural sights" does not make the president a "tough guy" or strategic".

"It makes you a monster", she said.

This is a war crime.

Threatening to target and kill innocent families, women and children - which is what you’re doing by targeting cultural sites - does not make you a “tough guy.”

It does not make you “strategic.”
It makes you a monster. https://t.co/IjkNO8BD07

​Representative Ilhan Omar, from Minnesota, also hit back against Trump, tweeting that the US president is threatening to commit "war crimes".

​She posted a follow up tweet urging House Democrats to re-assert control over war powers to curb the ability of a US president to launch attacks without Congressional approval.

This is a major test for our country.

Will we allow decades of executive overreach and militarism to continue? Or will Congress step in and perform our Constitutional role to stop a war? The world is watching.

​The statements by the two congresswomen come as key Democratic figures from the progressive wing of the party have introduced a bill to prevent the president from escalating the conflict with Iran and prevent a full-scale war from breaking out.

Vermont senator and Democratic presidential candidate Bernie Sanders, who has long been an advocate of introducing the war powers act, tweeted on Saturday that he would introduce legislation, alongside Democratic House Representative Ro Khanna, to stop Trump from "illegally" taking the US into a war with Iran.

I am introducing a bill with Rep. Khanna to stop Donald Trump from illegally taking us to war against Iran.

It's working-class kids who will have to fight and die in a disastrous new Middle East conflict—not the children of billionaires. https://t.co/H6ZHjijCnj

​Speaking to MSNBC on Friday, Khanna noted that the bill will "cut off any funding for offensive action against Iran or Iranian officials."

Trump's tweeted threats were widely met with scorn, as the president appeared to be threatening to commit war crimes while breaking UNESCO's 1954 Hague Convention for the Protection of Cultural Heritage in the Event of Armed Conflict, which rules out the intentional targeting of cultural heritage sites.

This follows a Saturday Trump tweet warning Iran that the US would target "52 sites" in Iran, including cultural sites, if it launched a retaliatory attack in response to the killing of top Iranian general, Qasem Soleimani.

In a dampening of White House rhetoric, the US secretary of state, Mike Pompeo, said in an interview with ABC following Trump's tweet that the US would "act lawfully".

Soleimani was assassinated in a targeted US drone strike on Friday as he rode in a two-vehicle convoy from the Baghdad airport. The targeted remote killings also assassinated six other members of Iranian-backed militias.

The Trump administration claimed by way of justifying the assassinations that the general was planning a series of attacks which would put Americans in harm's way.

Iran has stated that it will respond to the attack with vengeance, leaving many in the region and the world anxiously awaiting the next violent event.