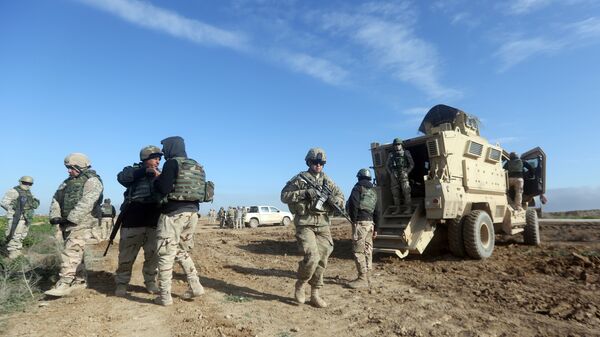 Svetlana Ekimenko
All materialsWrite to the author
Qasem Soleimani, one of Iran’s most revered military commanders, was killed in Baghdad on 3 December in an airstrike authorised by US President Donald Trump, with Iran promising to exact "savage" retribution.

The United States and its allies have reportedly suspended the training of Iraqi forces in the volatile aftermath of the US-authorized air strike in Baghdad on Friday that killed a top Iranian general, according to Reuters.

The report cites a letter by a senior German officer addressed to lawmakers, that reveals US Lieutenant General Pat White had decided to further increase protection for forces deployed in Iraq under Operation Inherent Resolve (OIR), which he commands.

“Thus, the training for the Iraqi security and armed forces throughout Iraq is temporarily suspended,” German Lieutenant General Erich Pfeffer wrote to members of the Bundestag defense and foreign relations committees in the letter, dated 3 January.

“The directive is binding for all partner nations involved in OIR at the training sites in Iraq,” he added.

Germany currently has around 120 troops deployed in Iraq under the US-led Operation Inherent Resolve.

The report comes against the backdrop of spiraling tensions in the region fueled by the recent US assassination of a top Iranian general.

In the early hours of Friday, Iranian Lieutenant General Qassem Soleimani, who headed the Iranian Islamic Revolutionary Guard Corps’ elite Quds Force, and 11 others, including the deputy commander of Iraqi Shia militia Abu Mahdi al-Muhandis, were killed by a US aerial attack near Baghdad International Airport. 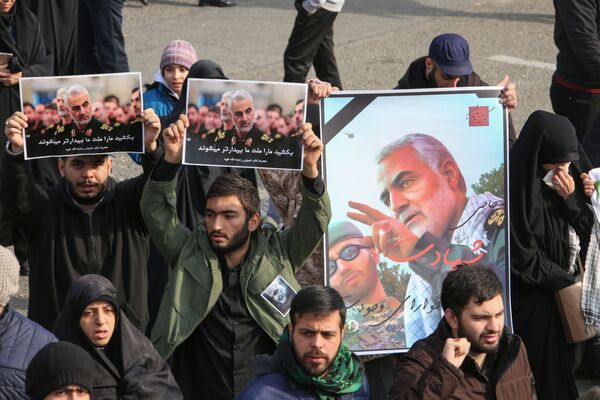 US President Donald Trump, who authorized the drone strike, said Washington had taken a preemptive, defensive move to “stop a war.”

Iranian President Hassan Rouhani has warned that Tehran will take revenge for what it views to be a heinous crime, as Supreme Leader Ali Khamenei announced three days of national mourning for Soleimani and warned that a “harsh retaliation is waiting” for the United States.

The new Quds Force leader, Brig. Gen. Esmail Ghaani, has warned of serious implications from the IRGC commander’s killing, urging everyone to “be patient” because they will “see the bodies of Americans all over the Middle East”.

His words echoed those of other top Iranian officials who vowed to retaliate against the US "crime”, accusing Washington of engaging in "international terrorism".

This report comes as the Pentagon has announced a further dispatch of at least 3,000 additional troops to the Middle East after thousands of people stormed the compound of the US Embassy in Baghdad, three US defence officials and one military official confirmed to NBC News on Friday.

The deployment of additional soldiers from a brigade of the 82nd Airborne Division, based at Fort Bragg, North Carolina, comes after several thousand Iraqis on 31 December, angered by a slew of US airstrikes against the Iraqi Shiite militia Kata'ib Hezbollah that killed 25 militia members and left 51 other people injured, marched to the US Embassy and attempted to enter it.

​As Iraqi police refused to stop them the protesters set fire to the outer parts of the sprawling walled complex. 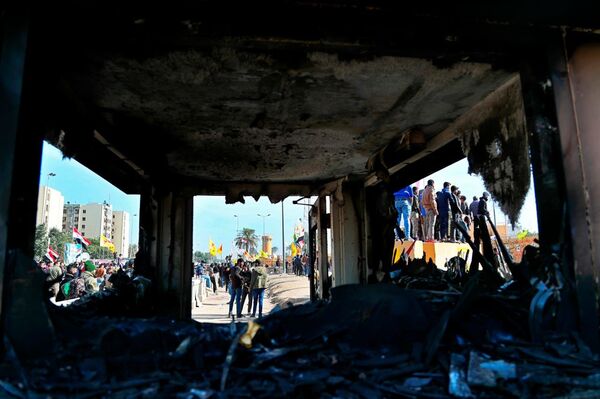 Pro-Iranian militiamen and their supporters are seen through broken windows of a burned checkpoint in front of the U.S. embassy in Baghdad, Iraq, Jan. 1, 2020.
© AP Photo / KHALID MOHAMMED

To quell the unrest in the Iraqi capital, which spanned roughly two days, Trump ordered additional Marines to the area, with US troops dropping flares from aircraft and firing tear gas to disperse the protesting militias.

US officials instantly pointed the finger of blame for the New Year's attack on Iran, with Trump threatening Tehran with countermeasures.

"Iran will be held fully responsible for lives lost, or damage incurred, at any of our facilities... They will pay a very BIG PRICE! This is not a Warning, it is a Threat," Trump tweeted.