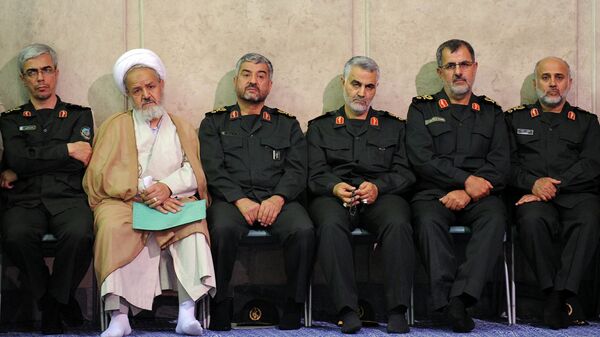 Ilya Tsukanov
All materialsWrite to the author
The senior general and commander of the Revolutionary Guards Quds Force, responsible for Iranian military operations abroad, was killed in a US drone strike early Friday morning, ramping up tensions between Tehran and Washington.

The Middle East Media Research Institute has dug up year-and-a-half-old footage of a speech given by Maj. Gen. Qasem Soleimani in which the Quds Force commander blasts US President Donald Trump over his “idiotic” Twitter comments and warns the US against starting a conflict with Iran.

“The US president, in response to statements by our president, made some idiotic comments on Twitter,” Soleimani said, referring to a July 22, 2018 all-caps tweet by Trump warning Iran not to “ever threaten the United States again” or “suffer consequences the likes of which few throughout history have ever suffered before.”

“It is beneath the dignity of the president of the great Islamic country of Iran to respond, so I will respond, as a soldier of our nation,” Soleimani continued. “You threaten us with a measure that the world has not seen before. First of all, it has been over a year since Trump became US president, but that man’s rhetoric is still that of a casino, of a bar. He talks to the world in the style of a bartender or a casino manager.”

This was the case not only with regard to Iran, but with regard to China, Russia, Europe, and other countries, Soleimani suggested, adding that when he listened to Trump he felt “that a gambler is talking.”

“Let me tell you Mr. Trump the gambler…Know that we are near you, in places that don’t come to your mind. We are near you in places that you can’t even imagine. We are a nation of martyrdom. We are the nation of Imam Hussein,” Soleimani said, referring to the grandson of Prophet Muhammed and key Shia figure who was killed in 680 AD after refusing to pledge allegiance to the second caliph of the Umayyad caliphate.

“Come on, we are waiting for you. We are the real men on the scene, as far as you are concerned. You know that a war would mean the loss of all your capabilities. You may start the war, but we will be the ones to determine its end,” Soleimani concluded.

The deceased Quds Force commander's remarks sparked a debate on social media, with users dividing in two camps, some showing sympathy to Soleimani, while others voiced support for Trump.

Soleimani calling Trumpito "a casino gambler" and "a bartender" was the nicest things I ever heard anyone say about President Cheetos... https://t.co/j98rMqJouI

Mob boss talk. It is all Trump knows. Soleimani was right about that Trump talks like a casino boss to everyone.

Mr. Trump gambler! We are the nation of martyrs, we are the people of Imam Hussein, it is enough for you to destroy the Quds Force, #Soleimani not die, he is alive in the heart of us all, we will soon defeat you all. pic.twitter.com/wI57u3d3Dj

Fears of a regional conflict escalated dramatically on Friday morning after Soleimani and a senior Iraqi Shia militia commander were killed in an airstrike at Baghdad International Airport. US officials accused Soleimani of plotting attacks against the US, and claimed he was behind the December 27 rocket artillery attack on a US military base in Kirkuk, northern Iraq, which killed a US civilian contractor. No group claimed responsibility for that attack, but the US blamed Kata’ib Hezbollah, an Iraqi Shia militia group with links to Iran, and bombed five of the group’s bases across Iraq and Syria, prompting crowds of Iraqis to try to storm the US Embassy compound in Baghdad.