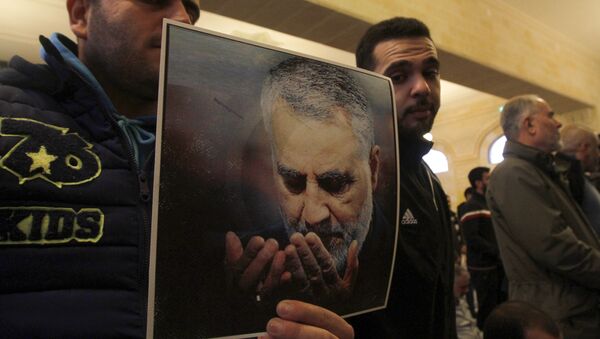 © AFP 2021 / Mahmoud Zayyat
Subscribe
MOSCOW (Sputnik) - On Friday, Pompeo posted on Twitter a video that showed limited numbers of Iraqi citizens running down a Baghdad street carrying an Iraqi flag. Alongside the video, Pompeo wrote "Iraqis – Iraqis – dancing in the street for freedom; thankful that General Soleimani is no more."

US Secretary of State Mike Pompeo exaggerated the reaction of Iraqi citizens to the death of top Iranian commander Qasem Soleimani, The New York Times reported on Saturday, citing eyewitnesses who said that celebrations occurred on a much smaller level than Pompeo implied.

The newspaper reported that while the video itself was authentic, there were a number of inconsistencies with what Pompeo portrayed, and what actually happened on the ground. The New York Times cited eyewitnesses who claimed that the group of men carrying the flag was very small and that the celebration was over in less than two minutes. The newspaper also stated that citizens were running, not dancing as Pompeo stated, in the video.

​The fact that the video had been viewed almost five million times, along with Pompeo’s caption, sets a dangerous precedent for factual news reporting, the newspaper stated. The State Department did not respond immediately to a request for a comment on the allegations, submitted on Friday evening, the newspaper reported.

In the early hours of Friday, Soleimani and 11 others, including the deputy commander of Iraqi Shia militia Abu Mahdi al-Muhandis, were killed by a US aerial attack near Baghdad International Airport. US President Donald Trump said Washington made a preemptive, defensive move to prevent war.

Iranian President Hassan Rouhani has warned that Tehran will take revenge for what it views to be a heinous crime. Supreme Leader Ali Khamenei called for three days of national mourning for Soleimani, who was the head of Iranian Islamic Revolutionary Guard Corps’ elite Quds Force until his death. Khamenei appointed Brig. Gen. Esmail Ghaani as the new Quds Force commander to replace Soleimani.