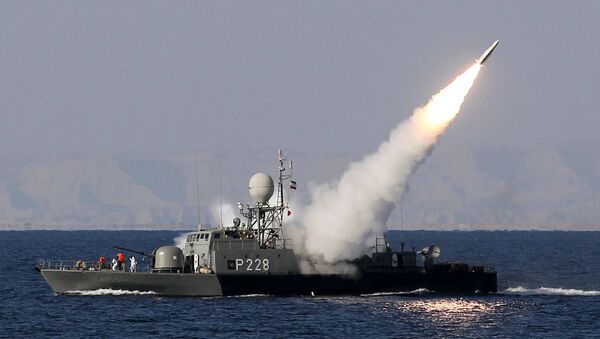 © AFP 2021 / EBRAHIM NOROOZI / Jamejamonline
Subscribe
The report comes in the aftermath of the murder of Qasem Soleimani, a top Iranian military commander who was killed in Baghdad on Friday in an airstrike authorised by US President Donald Trump.

The commander added that Tehran reserves the right to retaliate against the US for the assassination of the Quds Force chief.

Meanwhile, Al Mayadeen quoted the leader of Hezbollah's parliamentary bloc in Lebanon, Mohamed Raad, as saying that the response of the Iran-supported resistance axis to the general's murder would be decisive.

Raad added that Soleimani's murder was a US "error" that they will come to realise "in the coming days".

US Strategy on Iran

Earlier this day, Al Arabiya broadcaster quoted the US State Department as saying that the US strategy on Iran following the assassination of the Quds Force commander Soleimani will remain unaltered.

The Soleimani Assassination: Are We Heading Towards a New War in the Middle East?

The State Department underlined that Washington will continue its harsh sanctions policy towards Iran and has already undertaken necessary measures to protect its assets in the Middle East, the broadcaster added.

Tensions between the United States and Iran have spiked in the wake of an aerial strike in Baghdad carried out by US forces as a result of which top Iranian commander Qasem Soleimani as well as 11 others, including the deputy commander of Iraqi Shia militia Abu Mahdi al-Muhandis, were killed.

The US described its action as a preemptive move to avoid a military conflict and protect its personnel in the region.

The military official served as the head of the Iranian Islamic Revolutionary Guard Corps’ elite Quds Force. He was succeeded by Brig. Gen. Esmail Ghaani who previously held the post of Deputy Head of the unit.

000000
Popular comments
How this de facto Declaration of War against Iran was planned and played out for the benefit of the American public while they were home for the New Year holiday week. Americans are war weary but with clever nonstop propaganda can be goaded into action. Timeline: The US declares an anonymous possibly fictitious American contractor is killed by rockets in Iraq. The US blames Iran. The US retaliates by killing 26 Iraqis and injuring 50 more in Iraq. The US blames Iran. Iraqis storm the US Embassy in Baghdad after 26 of their countrymen were slaughtered. The US blames Iran. Trump beats his chest and takes the credit for murdering General Soleimani, more than likely following Israeli orders sent to him via President Kushner.

keyboardcosmetics
4 January 2020, 14:34 GMT12
000000
The murder of Soleimani has Zionazi fingerprints all over. It was performed using Zionazi modus operandi and probably assisted by the fakes as well. US "deplorables" rather than the Ziocons will typically take the consequences and those will be severe, stupid narcissist Dump will be the fall guy....