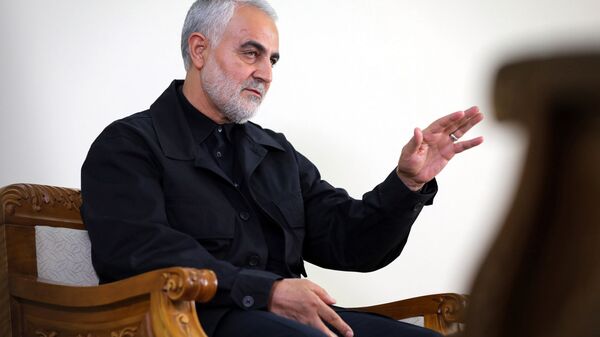 Sputnik (New Delhi): Commander of the elite al-Quds force of the Islamic Revolutionary Guard Corps (IRGC) Qasem Soleimani was killed in a US airstrike on Friday morning, 3 January. The operation was carried out after Washington accused Tehran of orchestrating a violent attack on the US Embassy in Baghdad.

Soleimani’s elimination by the US undeniably holds the potential to embroil the entire Middle East, and have a ripple effect on India’s economy as well. The impact would range from rupee depreciation to a dent in the nation's foreign exchange reserves and foreign remittances, as well as a spike in inflation, Indian analysts have indicated.

Any escalation of tension may lead to a disruption in the crude oil supply, resulting in higher crude prices, which would directly impact India’s current account deficit (CAD) and dig into the forex reserves.

According to India’s federal government data, foreign exchange reserves with the central bank, the Reserve Bank of India (RBI) touched a record high of $454 billion in the month of December 2019.

As of now, India’s current account deficit (CAD) is the only macro-economic indicator which is stable. CAD narrowed to 0.9 percent of the Gross Domestic Product (GDP) at $6.3 billion in July-September quarter compared to 2 percent of the GDP at $14.2 billion in the April-June quarter of the current financial year (2019-2020)*.

Energy expert Narendra Taneja told Sputnik: “If tension escalates in the Middle East, there will be an impact on the crude oil prices. Since we import 83 percent of our crude, it is bad news for the economy. Higher crude prices are bad for India. The dollar outflow will weaken the Indian currency.”

Indian oil imports from Iran are almost nil in the wake of the US sanctions. However, according to Taneja, it was not a question of “physical imports” from any particular nation. “The overall increase in the crude prices will deeply impact India.”

Iraq, Kuwait, and Saudi Arabia are the key Middle Eastern nations from where India imports crude oil. In 2018-19, Iraq topped the list of India's suppliers of crude from the Middle East, accounting for even more than Saudi Arabia. If Iraq becomes caught up in the US-Iran conflict, it might lead to inflation in India.

Indian retail inflation rate has already almost tripled, from 1.97 percent in January 2019 to 5.4 percent in November 2019. Madan Sabnavis, chief economist at Care Ratings points out that hike in the price of crude oil is going to be a “cause of worry” for India. The “increase in crude oil price has a significant impact on inflation,” says Sabnavis in a report titled ‘Crude Oil Price Escalation’, written in the context of the assassination of the top Iranian general.

Equity market watchers feel that if tension escalates, the market might remain volatile. “The emergence of a geo-political situation has led to some profit booking. Markets could be volatile going ahead due to risk of possible retaliation from Iran,” said Sneha Poddar, analyst, Motilal Oswal Financial Services, a major equity research and consultancy firm.

Speaking to the Indian daily Economic Times on the impact of Soleimani’s elimination, Vandana Hari, CEO of Singapore-based Vanda Insights, said: “US-Iran tension is a very big deal for Middle East geopolitics as a whole leading to a big escalation from here on. Not to forget, we are talking about a region that supplies nearly a third of the world’s oil requirements. It is not just Iraq of course.”

“A conflict of this nature has the potential to drag in pretty much all of the Middle Eastern oil producing countries because they are all aligned one way or another, for or against, either on the US side or Iranian side,” Hari added.

*India’s official financial year begins from 01 April to 31 March the next year.